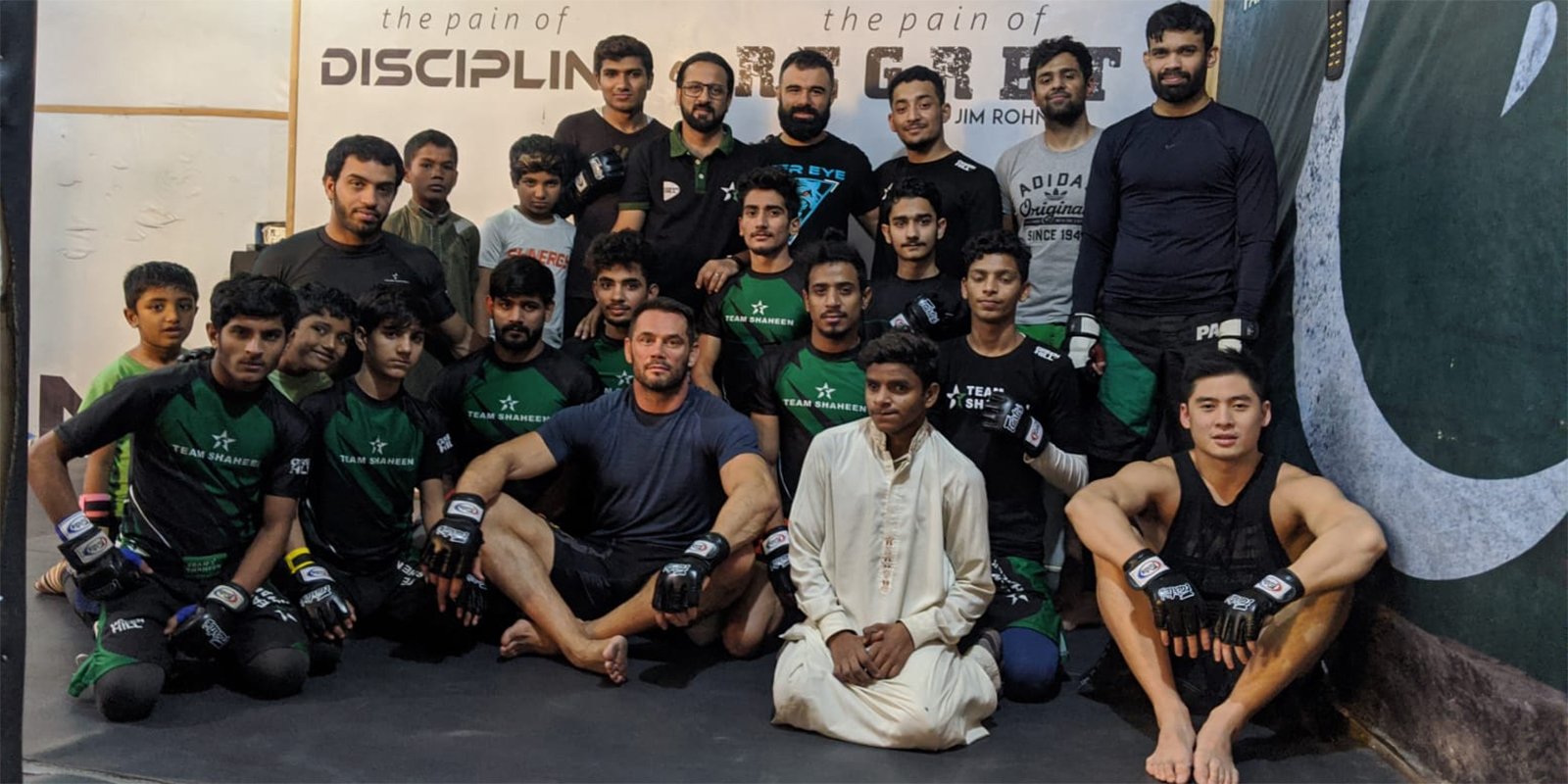 The security was in place at the Islamabad Airport long before the Sri Lankan team landed on the morning of December 9. Not just security but security and a half. The roads were closed for gen pop so the cricket playing VVIPs, cocooned even from the prying eyes, could be transported to the safety of their hotel — practically a fortress.

The ball players from Sri Lanka, in a few days’ time, would play cricket with the local lads in a bulwarked stadium located in the adjacent city of Rawalpindi. The stadium being in the garrison city would perhaps assure the visitors that they are in safe hands.

The American though, his name Rich Franklin, him being a world famous former mixed martial champion, lands in Lahore as a regular tourist with no security whatsoever. He and his crew of Singaporean and Filipino nationals, draw plenty of looks over during their week-long visit but they’re all friendly ones.

They walk the roughest of roads, drive through the oldest of towns, but without the corral of secret service keeping any danger at bay.

Franklin, a legendary figure in the fast growing mixed martial arts community, fought in the Ultimate Fighting Championship, colloquially called the UFC, literally before it was cool. An OG of the sport, he was the first man to knock out Ken Shamrock (also of the WWF fame), shared the famed Octagon with Anderson Silva (twice!), and holds notable victories over names such as Chuck Liddell and Wanderlei Silva.

He was the last man to hold the UFC middleweight title before Anderson, his and most men’s kryptonite, embarked on a seven-year unbeaten run.

That Richard Franklin was in Pakistan, for a week.

While the bulk of the country’s sports fraternity waited in vain for clouds above the Pindi cricket stadium to clear, Franklin marvelled at Pakistan’s culture, hospitality and even infrastructure — the latter of which he found in much better shape than expected.

“Pakistan is actually much nicer than I expected. On our way, I saw the railroad system. The infrastructure here is actually pretty nice. We were on the road last night and it was split up into eight lanes, like a highway. It had a major concrete overpass. I did not expect that at all,” said Franklin, who is now the vice-president of Singapore-based One Championship.

In Pakistan on the invitation of local MMA hero Bashir Ahmed (who now also works with ONE Championship) to shoot an episode of his reality show ONE Warrior series and discover local talent, Franklin says it did not take any convincing for him to agree to visit Pakistan.

“Bashir told me this was the plan, and I jumped on it rightaway. I have travelled extensively to not carry many pre-conceived notions that the media, like the CNN, builds. In fact, the people here have been super friendly. When we landed here yesterday, they were showering us with flower petals. I had never experienced that,” he said, adding: “Pakistan also has a reputation that its people are tough and hard working, and I wanted to see that.”

For someone who goes from country to country in search of new fighting talent, Franklin admits that the novelty of travel has long worn off. But Pakistan is unique enough that when not tackling my barrage of questions, he peers out the car window and points to that “cool” thing.

“I was in Tajikistan. This is significantly different from that. The old city here is not just old, it seems older than the Bible itself. Some of the cities here might be older than my entire country. Then there is the juxtaposition of modern infrastructure with all that is old, and it really gets you,” he says.

A Midwesterner from Cincinnati, Franklin believes that big cities are more diluted versions of the aboriginal culture. Driving through Lahore’s old city, he couldn’t help but notice that the locals have still managed to retain their identity despite the onslaughts of foreign cultures.

“The culture here looks authentic and unaffected by outside influences,” he said. “As the world globalises, it just becomes smaller and smaller. One culture affects another, major Western countries come in, and the local culture loses its identity. Right now, it’s pretty much preserved here and it still has that feel of authenticity, which is very cool.”

As the crew nears the Badshahi Mosque, the red sandstone structure’s centuries old build astonishes Franklin, but not as much as the convocation of eagles in the viccinity.

“Whoa! Look at all the eagles. The bald eagle is our national bird in the United States. I’ve been everywhere but we don’t see them in their natural habitat. And here they are by the dozens,” he observed.

At one point, when told that the Prime Minister of Pakistan is a former cricket captain, Franklin does not seem surprised.

“If you are the captain of a World Cup winning team, it means you know how to lead people and collectively motivate them towards a common goal. These are the very things you need to lead most countries. Sometimes when you don’t care about the politics, that’s exactly what makes you an effective leader,” he says.

“At another instance, the conversation switches from Rich Franklin the tourist to Rich Franklin the athlete. His advice to folks wanting to make it in professional sports is a slight departure from conventional wisdom.

“When I look at what I did, the chances of me pulling it off are so slim that it’s pretty much impossible. I hear people say all the time that ‘you’ve got to work hard’. That’s one of the biggest BS people will tell you. It’s not just about hard work because you can work hard all day but if you’re not working smart, you’re not going to get anywhere.”

One of the biggest criticisms of MMA is that it is a violent sport. As expected, Franklin disagrees, but with logic.

“How do you define violence?” he asks rhetorically. “My definition of violence is something being done against your will. Violence is when you’re walking in the streets and someone cuts open your head with an iron rod against your will. In MMA, two athletes train and they both do so for combative reasons. So I’m not forcing this other person to do anything against their will. There is a common objective. This is a competitive sport with no malicious intent.

“I would also ask people who have a problem with athletes bleeding on TV. Do you let your children watch a movie where someone’s getting shot? How is this different then? As a parent, it’s your duty to explain to your kid why the violence portrayed in TV is not real. Similarly, I need to explain to my child that I am not going out there to hurt somebody. This is just for competition.”

Rich Franklin was in Pakistan to discover and meet Pakistan’s first professional female MMA fighter Anita “The Arm Collector” Karim and Irfan “the Gorilla” Ahmed. Both will be competing on his reality show One Warrior Series