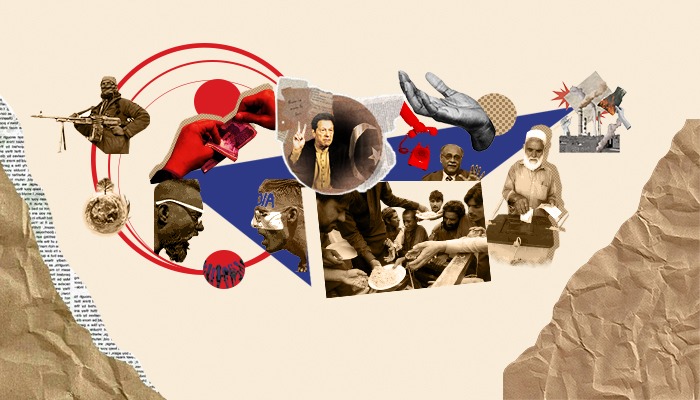 If you think 2022 was a gut-wrenching, terrifying and exhausting year for Pakistanis, wait till you see what 2023 seems to have in store.

With the entire world fearing an oncoming recession and climate change accelerating the humanitarian crisis around the globe, developing countries like Pakistan are far more vulnerable.

The effects of everything Pakistan experienced last year might worsen in 2023. The looming trepidation of default amid widening governance gaps can jeopardise administrative tasks. Thus, the flood-devastated country must fasten its seat belt as the bumpy 2023 ride kicks off.

Following are the top 5 issues Pakistanis should be looking out for in the current year.

Businessmen have called 2022 the worst-performing year for the Pakistani economy. The Asian Development Bank (ADB) said in a report that Pakistan's economy will slow to 3.5% in the fiscal year 2023 due to devastating floods, tightening of monetary policy, and crucial efforts to address significant fiscal and external imbalances.

Since the beginning of 2022, Pakistan's currency has declined by more than 27%, reaching its lowest level of over 240 to the dollar. This decline is a reflection of the nation's precarious financial circumstances.

The current government is working to repair its strained ties with the International Monetary Fund (IMF) in order to resume its loan programme and resolve its dollar liquidity crisis.

“For FY2023, economic growth is likely to remain below the budgeted target due to devastation created by floods. This combination of low growth, high inflation and low levels of official reserves is particularly challenging for policymakers,” the Ministry of Finance stated in its monthly report released in December 2022.

Pakistan's inflation rate is projected to remain higher in 2023, which means the public must stay ready for prices to go up and possible budget deficits at home.

Although there are inflationary pressures, the trade and current account deficits are steadily improving, which is good news.

In terms of revenue, FBR has overshot both its 5-month target of Rs2,680 billion and monthly target of Rs537 billion.

The achievement was made possible by extraordinary measures in the areas of recovery, monitoring, and everyday vigilance. The FBR would be able to meet the stipulated revenue targets for the current fiscal year as well if these efforts were to continue.

Climate crisis is here to stay

The International Rescue Committee said that climate change would accelerate the humanitarian crisis.

Studies have shown that countries like Pakistan that contribute the least to the global carbon footprint suffer the most from the environmental changes it causes. If environmental degradation and climate change threats are not addressed, Pakistan's already dangerous economic situation will worsen.

The World Bank estimated that the nation would need $348 billion between 2023-2030 in response to climate and development challenges. The devastating floods in 2022 that displaced millions call for urgent climate action in the coming year.

Will a country that is still under the water be able to bear more natural disasters?

Pakistan’s 12th General Election since 1970 — when we separated from the East — will be the first to be conducted by a government that came into being as a result of a "no-confidence motion".

The PTI has been insisting the ruling coalition in the centre conduct the early elections with threats of dissolving the Punjab and Khyber Pakhtunkhwa assemblies.

“If they are ready for elections by the end of March, then we won't dissolve the assemblies. Otherwise, we want to conduct polls by dissolving the KP and Punjab assemblies,” former prime minister Imran Khan said in an interview with a private news channel.

However, Minister for Economic Affairs Sardar Ayaz Sadiq has ruled out the possibility of early elections in the country, saying the Pakistan Democratic Movement's (PDM) coalition government in the Centre will complete its term.

The government says it was bound by constitutional limits and that delimitation is planned by the Election Commission of Pakistan according to the freshly held census.

The issue is not only political or constitutional at this point. Many areas in the country have still not been dewatered, leaving millions still displaced and living in tents, relying on charity. How will this huge population participate in the elections?

There will be a total of 336 seats for members in the National Assembly, out of which 60 have been reserved for women and 10 for non-Muslims. It is expected that citizens will go to the polls to choose a new parliament no later than mid-October.

Whichever party wins will have its hands full trying to address Pakistan’s long list of problems.

While it is exciting that Pakistan will be hosting the Asia Cup in 2023, India's outright refusal to attend the sporting event in Pakistan gave birth to controversy, leaving people confused. It is now difficult to predict what exactly will happen in the future.

The Board of Cricket in India (BCCI) Secretary said that India won’t be touring Pakistan for the event which left the Pakistan Cricket Board (PCB) “surprised and disappointed”. Former PCB chairman Ramiz Raja strongly insisted that the Cup take place in Pakistan, regardless of India's presence.

The Asian Cricket Council, on the other hand, said that the event should take place at a neutral venue.

Current PCB Management Committee Chairman Najam Sethi has said that the decision will be taken by the Pakistan government as it’s a “political issue”.

“We can't take any decision which isolates us,” he said.

Now only time will tell if Pakistan hosts Asia Cup 2023 at home or on some other country's soil.

In the preceding year, Pakistan saw a spate of attacks that took a number of lives, including law enforcement agencies (LEAs) personnel. These attacks, however, will not end and are expected to continue.

The targetting of innocent people spiked after the Tehreek-e-Taliban Pakistan (TTP) announced ending a ceasefire with Islamabad — as peace talks with the group hit a snag and nothing fruitful came out of the meetings.

The TTP regrouped in Afghanistan after the Taliban's takeover, with Pakistan repeatedly asking the interim government in the neighbouring country to ensure that its soil isn't used for terrorism. But the Taliban-led government has not been able to live up to the expectations.

The activities of militants have been mainly focused in Balochistan and Khyber Pakhtunkhwa, with the former accounting for 31% of the attacks in the last year and the latter 67%, according to stats provided by Interior Minister Rana Sanaullah.

In its annual report, the Center for Research and Security Studies (CRSS) said that Pakistan saw as many as 376 terror attacks in the last year. A majority of these attacks were claimed by banned terror outfits such as TTP, Daesh, and the Balochistan Liberation Army (BLA).

In light of the rising terror incidents, the National Security Committee (NSC) decided on January 2 that no country would be allowed to provide sanctuaries and facilitation to terrorists, and Pakistan reserves all rights to safeguard its people.

During the next year, despite the resolve of the government and security forces to root out terrorism, it seems that the terror attacks will persist amid political and economic crises.

The writer is a staff member at Geo.tv