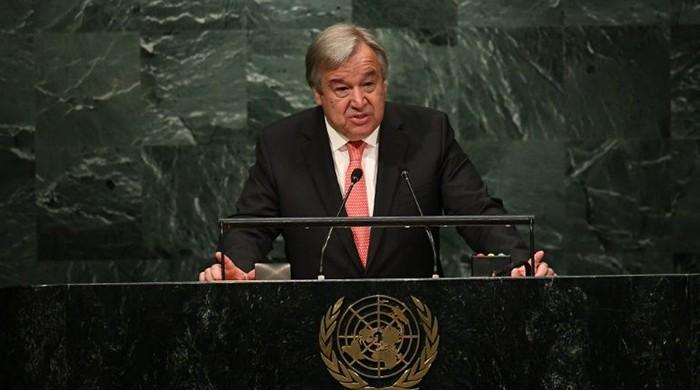 Making his first address to the Security Council since taking office, Guterres said too much time and too many resources were being spent on responding to crises rather than preventing them.

"People are paying too high a price," he said. "We need a whole new approach."

The ex-prime minister of Portugal and former head of the UN refugee agency took over from Ban Ki-moon on January 1 with a promise to shake up the world body.

But Guterres is confronted with a deeply divided Security Council that has notably been unable to take decisive action to end the nearly six-year war in Syria, where more than 310,000 people have been killed.

The rules-based international order "is under grave threat," he said, describing the UN response to global crises as "fragmented."

Guterres announced plans to launch an initiative to enhance mediation as part of his commitment to a "surge in diplomacy for peace," but he did not offer details.

The 67-year-old diplomat-in-chief is expected to have a more hands-on approach than his predecessor Ban who left most of the mediation efforts to his special envoys.

He encouraged the Security Council to invoke article six of the UN charter, which allows it to investigate disputes and lay out procedures for a settlement.

"Too many prevention opportunities have been lost because member states mistrusted each other's motives, and because of concerns over national sovereignty," said Guterres.

"Today, we need to demonstrate leadership, and strengthen the credibility and authority of the United Nations, by putting peace first," he said, renewing his pledge to make 2017 "a year for peace."

Complicating Guterres's plan to revitalise UN diplomacy is the question mark hanging over the foreign policy of the incoming US administration under President-elect Donald Trump.

Trump has dismissed the world body as "just a club for people to get together and have a good time."

Guterres spoke with the incoming US leader by phone last week and the conversation was described by a UN spokesman as "very positive."

Later this week, Guterres will make his first foray abroad as UN chief, heading to Geneva to shore up Cyprus peace talks.

He returns to Geneva next week to meet Chinese President Xi Jinping, whose support for the United Nations has been steadily growing.

In one of her final addresses to the council, US Ambassador Samantha Power listed many of the conflicts raging worldwide -- in Syria, South Sudan, Yemen, Libya, the Democratic Republic of Congo, Burundi, Nigeria and Mali.

"It is obvious that we as a council can do better," said Power, who will end her term as US envoy when the new Trump administration takes over on January 20.

She hit out at Russia, accusing Moscow of "trampling" over Ukraine's sovereignty in clear violation of the UN charter, and criticising the military campaign in support of President Bashar al-Assad in Syria.

Russia has resorted to its veto power six times to block action by the council on Syria.

Russia's envoy shot back, accusing the United States of bringing chaos to the Middle East with the invasion of Iraq, the campaign against the Daesh in Syria and by "destroying" the state in Libya.

"The outgoing administration of President (Barack) Obama is desperately looking for those that it can blame for their failure," said Ambassador Vitaly Churkin.

French junior minister Matthias Fekl recalled France's proposal to restrict the use of the veto by council powers in conflicts that pose a risk of mass atrocities.

"This council must be able to act when it is necessary," said Fekl.

Russia delivers another batch of advanced MiG-29 to Syria