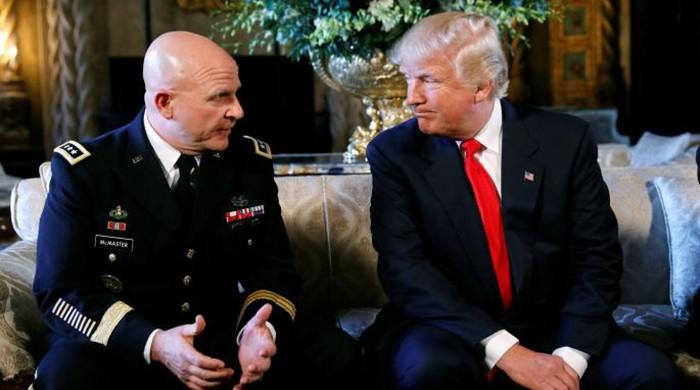 WASHINGTON: US President Donald Trump on Monday named Lieutenant General Herbert Raymond McMaster as his new national security adviser, again turning to the US military to play a central role on his foreign policy team.

McMaster is a highly regarded military tactician and strategic thinker, but his selection surprised some observers who wondered how the officer, who is known for questioning authority, would deal with a White House that has not welcomed criticism.

"He is highly respected by everybody in the military and we're very honoured to have him," Trump told reporters in West Palm Beach where he spent the weekend. "He's a man of tremendous talent and tremendous experience."

McMaster replaces a Trump loyalist. Michael Flynn, a retired Army lieutenant general, was fired as national security adviser on Feb. 13 after reports emerged he had misled Vice President Mike Pence about speaking to Russia's ambassador about US sanctions before Trump's inauguration.

The ouster, coming so early in Trump's administration, was another upset for a White House that has been hit by miscues, including the controversial rollout of a travel ban on people from seven Muslim-majority countries, since the Republican president took office on Jan. 20.

Trump also named Keith Kellogg, a retired US Army General who has been serving as the acting national security adviser, as chief of staff to the National Security Council. John Bolton, a former US ambassador to the United Nations, would serve the administration in another capacity, Trump said.

Kellogg and Bolton were among those in contention as Trump spent the Presidents Day long weekend considering his options for replacing Flynn. His first choice, retired Vice Admiral Robert Harward, turned down the job last week.

The national security adviser is an independent aide to the president and does not require confirmation by the US Senate. The role has varied from administration to administration, but the adviser attends National Security Council meetings along with the heads of the State Department, the Department of Defense and key security agencies.

McMaster, 54, is a West Point graduate known as "H.R.," with a PhD in US history from the University of North Carolina at Chapel Hill. He was listed as one of Time magazine's 100 most influential people in 2014, partly because of his willingness to buck the system.

A combat veteran, he gained renown in the first Gulf War - and was awarded a Silver Star - after he commanded a small troop of the US 2nd Army Cavalry Regiment that destroyed a much larger Iraqi Republican Guard force in 1991 in a place called 73 Easting, for its map coordinates, in what many consider the biggest tank battle since World War Two.

As one fellow officer put it, referring to Trump's inner circle of aides and speaking on condition of anonymity, the Trump White House "has its own Republican Guard, which may be harder for him to deal with than the Iraqis were." The Iraqi Republican Guard was the elite military force of ousted dictator Saddam Hussein.

McMaster's fame grew after his 1997 book "Dereliction of Duty" criticized the country's military and political leadership for poor leadership during the Vietnam War.

Trump's pick was praised by one of the president's strongest backers in the US Congress, Republican Senator Tom Cotton, who called McMaster "one of the finest combat leaders of our generation and also a great strategic mind. He is a true warrior scholar, and I'm confident he will serve both the president and the country well."

In a July 14, 2014, interview with the Columbus Ledger-Enquirer in Columbus, Georgia, where Fort Benning is located, McMaster, then the base commander, said: "Some people have a misunderstanding about the Army.

"Some people think, hey, you’re in the military and everything is super-hierarchical and you’re in an environment that is intolerable of criticism and people don’t want frank assessments.

"I think the opposite is the case ... And the commanders that I’ve worked for, they want frank assessments, they want criticism and feedback."

That attitude was not always shared by his superiors, and it led to his being passed over for promotion to brigadier general twice, in 2006 and 2007.

On McMaster's third and last try, General David Petraeus – who took himself off the list last week for Trump's national security adviser – returned from Iraq to head the promotion board that finally gave McMaster his first general's star.

Then a colonel, McMaster was commander of the 3rd Armored Cavalry Regiment that in the spring of 2005 captured, held and began to stabilise Tal Afar on the Iraqi-Syrian border.

The city was held by extremists, a crossing point between Syria and Iraq for militants who started as al-Qaeda in Mesopotamia under Abu Musab al-Zarqawi and morphed into Daesh after he was killed.

McMaster's preparation of the regiment is legendary: He trained his soldiers in Iraqi culture, and had them read books on the history of the region and counterinsurgency strategy.

It was a sharp change from the "kill and capture" tactics the United States had used in Iraq since the invasion in March 2003, and to which the Obama administration returned in Afghanistan, Iraq and Syria.

The strategy was largely a success, although McMaster's use of it and especially his willingness to acknowledge that Iraqis had some legitimate grievances against one another and the occupying coalition forces, did not endear him to his superiors and helped delay his promotion to brigadier general.

The strategy did not survive the departure of McMaster's troops, with Tal Afar falling into the hands of militants. Along with the west part of Mosul, it is now a key objective in the battle to rid Iraq of Daesh.