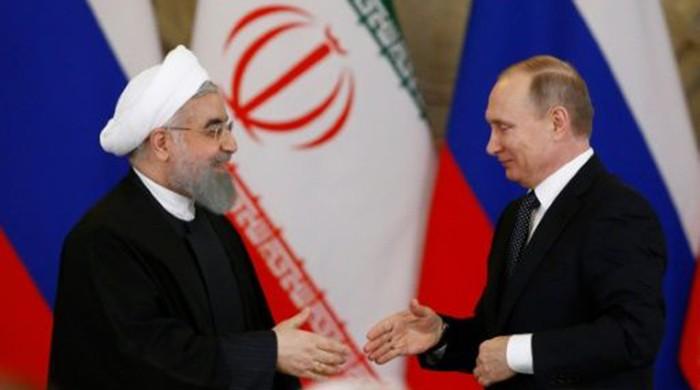 The meeting between Putin and Rouhani, who have grown closer through their mutual support of Syrian president Bashar al-Assad, mostly focused on flourishing economic ties in the fields of energy and industry.

Putin said in televised comments after the meeting that trade between the countries had "grown more than 70 percent" last year.

"This is truly a good result considering that it was achieved in unstable global conditions and amid persistent volatility on the commodity and currency markets," Putin said.

A joint statement published by the Kremlin said that "special attention" had been paid to cooperation in energy, with both sides pledging to continue efforts to stabilise the international market.

In addition to cooperation on Syria, energy and defence ties have deepened between Iran and Russia in recent years.

Russia is to build nine of Iran's 20 proposed nuclear reactors and has emerged as a long-term arms partner, supplying Tehran with its S-300 air defence missile system.

The relationship has blossomed under Rouhani despite the countries having a complicated history over territory, oil and Communist ideology.

Rouhani is looking to boost Iran's economy ahead of elections in May, in which he is expected to stand for a second term.

Putin also hailed the countries' role in ensuring peace in Syria, where both Russia and Iran have shored up Assad.

The joint statement said that cooperation between Tehran, Moscow and Ankara to bring the Syrian regime and armed rebels to the negotiating table was "an important step on the road to the success of the Geneva negotiations under the auspices of the United Nations."

Rouhani said that Moscow and Tehran had "begun effective cooperation" in countering "terrorists" in Syria, in a speech at Moscow State University where he was granted an honorary doctorate.

Although the two sides reiterated the importance of cooperation on Syria, Rouhani's visit came as splits emerge between the countries over the role to be played by Turkey, which is backing opponents of the regime.

Moscow has formed an unlikely alliance with Ankara since 2016, envisioning Turkey as part of a solution to the Syrian conflict.

But Iran has been more wary about Turkey's involvement in efforts to end hostilities, with tensions mounting after Moscow and Ankara left Tehran out of a truce they brokered in December.

Russia's entry into the conflict in September 2015 -- when it began launching air strikes to shore up Assad's forces -- helped turn the tide for the Syrian regime, while Iran has provided military advisers and frontline militia fighters.

More than 310,000 people have been killed in Syria since the conflict broke out in March 2011 with protests against Assad's rule.