LONDON/MANCHESTER: A dozen British Pakistanis have won elections to become members of the House of Commons on mainly Labour and Conservative tickets.

Over 40 men and women of Pakistani origin took part in the snap General Elections and 12 have secured their place in the Westminster Palace: nine from Labour and three from Conservatives.

Sajid Javed, Nusrat Ghani and Rehman Chishti from Conservatives have defended their respective constituencies successfully. Tasmeena Sheikh of Scottish National Party (SNP) has lost her seat to Conservatives. No other Pakistani origin candidate from other political parties or independent could make it to the hung Parliament.

In comparison to 2015 Parliament when nine MPs won elections, the number has now reached 12.

Khalid Mehmood has defended his seat for the record 5th time. He has returned with an increased majority of 18,383. Mahmood gained 68% of the overall vote, a 10% increase on his vote share in 2015.

Shabana Mehmood successfully defended her seat for the third time. Shabana secured 34,166 votes - nearly 29,000 more than her closest rival. There was a turnout of 59 per cent, which was lower as compared to the rest of the region.

Yasmin Qureshi, one of the first Muslim women parliamentarians, defended her seat for the third time. Qureshi secured 25,676 votes, which is nearly 60% of the voter turnover. Qureshi won with an exceptional lead of nearly 12,500 and a 10% swing in favour of Labour.

Naz Shah, Labour candidate from Bradford West for the second time, won with a clear majority in Bradford west constituency. Shah secured 29,744 votes and her rival independent candidate Salma Yaqoob could only get 6345 votes. Shah won just shy of 50% of the vote in a contest that was mired in acrimony as nasty campaign was run against her.

Imran Hussain got 29,841 votes. He won from this constituency with a clear majority of over 20000 votes and secured 65.4% votes of the overall turnout with 18% swing towards labour in this constituency. Imran will represent Bradford East for the second time in Westminster.

Labour's Afzal Khan, who is also a European Member of Parliament, won the Gorton seat which had been vacant following the death of veteran MP Sir Gerald Kaufman. Afzal Khan romped home to victory with a majority of 31,730, up by 8,391 - comfortably defeating a challenge by George Galloway. Afzal khan grabbed a total of 35083 votes with a Labour swing of 14% in the constituency.

Labour's Mohammed Yasin, who stood for the Westminster for the first time, has beaten Conservative party’s Richard Fuller, who had served as Bedford and Kempston MP for seven years .Win for Mohammed Yasin came as a surprise as he was branded a paper candidate but his services for the city as a councillor for last 11 years has earned him a seat in Westminster. Mr Yasin won in Bedford with a narrow margin of over 800 but it was a well deserved victory in the end. Mr Yasin grabbed 22,712 votes in total, with a total swing for labour from this constituency was 6.6% and a turn out of 46.8% for Labour.

Warrington's first Muslim Lord Mayor and Labour Party candidate for Warrington south constituency Faisal Rasheed has won with a majority of nearly 2500. Faisal was favourite from this constituency thanks to the Labour swing of 9.1% which enabled him to get 29,994 total votes with 48.4% turn out in favour of Labour.

Sajid Javed, Conservative candidate for Bromsgrove, has defended his seat for the third time. Sajid Javaid who was tipped to become joint leader of Tory party has served in various ministerial posts. Sajid has secured 33, 493 votes on a swing 8.1% in favour of Tory Party. Mr Javed won the seat with a margin of over 16,000 votes.

Rehman Chishti attended the count on election night with Sanam Bhutto. He has previously worked with Benazir Bhutto and he successfully defended his seat for third time for Gillingham constituency. Mr Rehman secured a total of 27,091 votes with a swing of 7.5 % in favour of Conservatives. His nearest rival could only get 17,000 votes so he won with a majority of over 10,000 votes from Gillingham and Rainham.

Nusrat Ghani, also known as Nas Ghani, the Conservative candidates for Wealdon, secured 37,027 total votes. Ms Nas won the seat with a majority of over 24000 and a swing in favour of Conservative of 4.2%. Ms Nas was the member of Parliament from Wealden in 2015 elections.

Labour Party’s Rosena Allen-Khan retained her Tooting seat with 34,694 votes, against the Conservative Party’s Dan Watkins who secured only 19,236 votes.

Rosena had won the seat earlier after Sadiq Khan resigned to become the London Mayor.

The turnout in the constituency remained at 74.7%.

Tasmina Sheikh, the only British Pakistani Candidate from Scottish National Party, has lost to Tory Party. Tasmina secured 19110 votes with a swing of 20.8 % in favour of conservatives.

Many other Muslim candidates have made their way into parliament which include Bangaldeshi origin Roshanara Ali of Labour from Bethnal Green, Rupa Huq from Ealing, Tulip Siddique from Hampstead and Lib Dem's Palestinian origin Layla Moran.

George Floyd death: Protests flare across US as officer charged with murder of African-American man

US coronavirus death toll reaches 100,000 as Europe reopens from lockdown 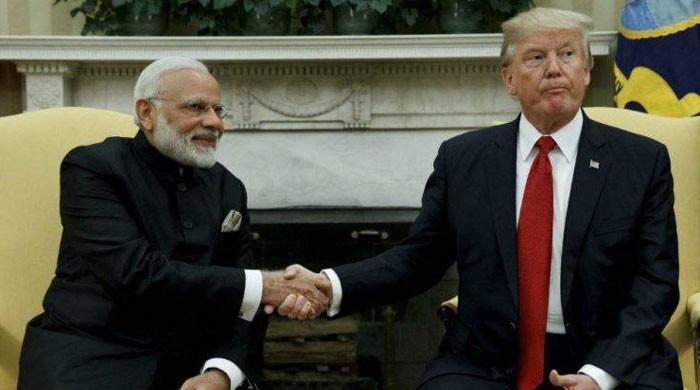 No contact between Trump and Modi on military standoff with China: Indian govt source