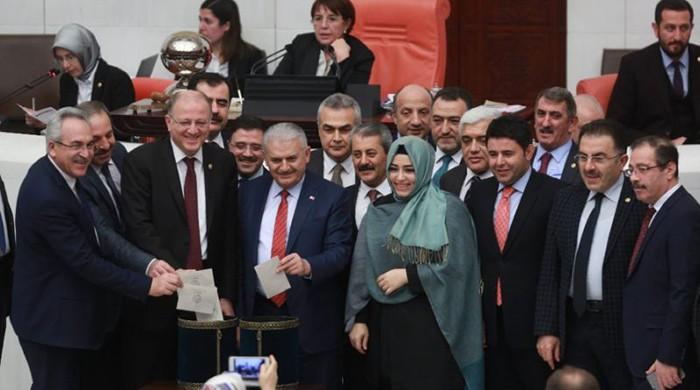 The parliament in a late-night session approved the seven final sections of the 18-article constitution and in a final vote the ruling Justice and Development Party (AKP) received 339 "yes" votes for the bill as a whole.

The party needed at least 330 or more votes -- a three-fifths majority -- for the adoption of the constitutional change and to send it to a referendum for final approval.

There were 142 votes against the bill during its second reading.

The proposed changes, which would create an executive presidency for the first time in modern Turkey, are controversial and far-reaching.

The president would have the power to appoint and fire ministers, while the post of prime minister will be abolished for the first time in Turkey's history and replaced by one or more vice presidents.

If approved, parliamentary elections and presidential ballots would be held simultaneously, with the draft giving November 3, 2019 as the poll date.

Immediately after the vote, Prime Minister Binali Yildirim told the 550-seat assembly that the "last word" and "last decision" would be given by the people.

"No one should have any doubt of this, on the issue of constitutional change, the most correct decision will certainly be given by the people."

The public vote is likely to take place in April.

The bill had already been approved in its first reading during a marathon week of debating that began on January 9 and included sessions that often lasted late into the night.

During both readings, lawmakers clashed in the assembly which saw some of the worst fighting in years with deputies bloodied and one lawmaker even claiming to have been bitten on the leg.

All eyes on Afghanistan as partial truce between US, Taliban comes into force