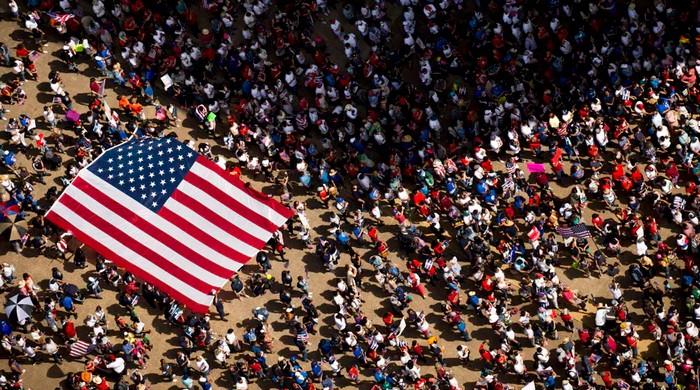 Demonstrators took to downtown Dallas early Sunday evening to voice their protest against the immigration rights issue that became one of the highlights of US President Donald Trump’s administration.

Called the Mega March – the second iteration of the one in 2006 – the protest garnered more than 3,000 people, according to the police estimate cited by Dallas News. Many sported Uncle Sam’s colours of red, blue, and white in order to show how “this is really about America’s values,” organiser Domingo Garcia explained.

87-yr-old Maria Galicia is from Mexico. "Are you sure you want to go?" her granddaughter asked. "Yes!" Maria said #megamarch2017 pic.twitter.com/e2JmsAuWE7

One such child asked, “Mommy, will I have to go back to Mexico?”

“As a child of immigrants, it's hard for us to travel. […] Now my mom is worried,” says another.

Coppell High students, friends Naureen Wajahat & Aparna Bejoy. Both 17, "too young to vote." This is their 1st protest #megamarch2017 pic.twitter.com/WmjppBpidx

Even the buffed-up and intimidating, but compassionate, ‘bikers’ also joined the protest.

Adam & Gregorio Madrid"There are bikers who say they are against illegal aliens. Well we are bikers in support of immigrants" #megamarch2017 pic.twitter.com/cNKIwmV7Bz

In addition, moving alongside these demonstrators were Dallas policemen on bikes, horseback, and foot. Thankfully, no one was arrested.

Representatives of the American Civil Liberties Union (ACLU), which has been very active in helping the immigrants and permanent residents – both in the country and those travelling – also partook in the walk in order to monitor security authorities’ behaviour.

Various notables were also in the crowd, including Joaquin Castro and Beto O'Rourke of the Congress, and leading activist Martin Luther King III.

“We come here today to march against a national agenda that would turn back the clock on our nation’s great tradition of values,” roared King to the audience, the publication reported.

Nevertheless, Trump supporters also somehow entered the march. One of them, a resident of Dallas, commented on how immigrants are more valued than the war veterans, and that “they need to go back and solve their own problems.”

All eyes on Afghanistan as partial truce between US, Taliban comes into force