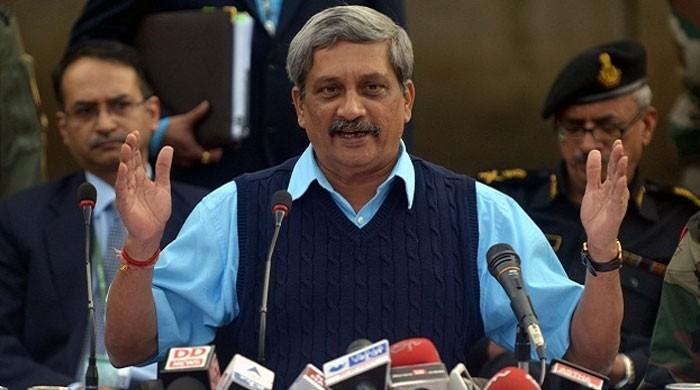 "Let me express grief for those who lost their lives. Terrorism anywhere in any form can’t be accepted," Indian media quoted Parrikar as saying.

The attack left at least 61 security personnel martyred and 117 others wounded, when terrorists stormed the police training facility located on Quetta's Sariab Road late Monday night. The assailants had entered the hostel of the center and fired at the recruits point-blank.

Balochistan - Pakistan's largest province in terms of land area - has been plagued by a separatist insurgency and militancy for several years now. Officials have repeatedly hinted at the involvement of India and Afghanistan in subversive activities in the province.

Modi expressed his concern over the Baloch freedom struggle during a 90-minute long address in August at Red Fort for the Indian Independence Day. Where the statement drew and outpour of anger from Pakistanis and particularly the people of Balochistan, there it also reinforced India's fomenting of terrorism in different parts of Pakistan.

However, security forces have conducted effective operations across Balochistan cracking down on terrorists and miscreants. This has led to a considerable drop in militancy across the province, yet scattered attacks continue to take place at times.

Another major terrorist attack at the Civil Hospital Quetta in August had left over 70 people dead - majority of which were members of the legal fraternity. The incident drew an outpour of anger with renewed calls for action against militants.

Security forces have since then intensified intelligence-based and combing operations in the province in an effort to establish peace in the province.