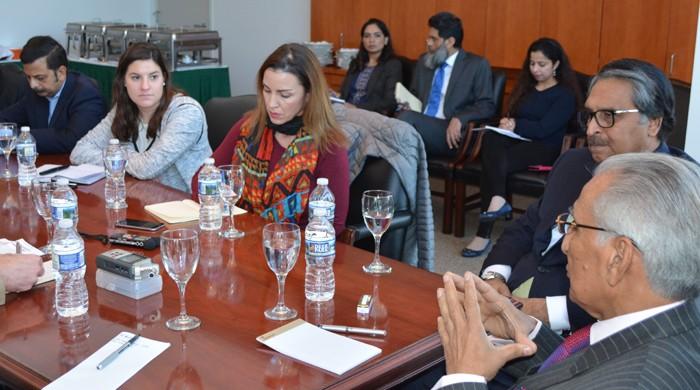 WASHINGTON: In a meeting with media representatives at Pakistani embassy on Monday, Special Assistant to the Prime Minister for Foreign Affairs Tariq Fatemi said that Pakistan is looking forward to working closely with the new US administration of President-elect Donald Trump and want bilateral relations to be further strengthened in the future.

Fatemi further apprised the media that he is currently visiting US to have interaction with the current administration and to reach out to the officials who are likely to join the new administration.

“Once President-elect Donald Trump assumes his office, Pakistan is looking forward to meaningful engagement with the United States in further improving bilateral relations and playing its role in the context of regional and international issues,” he said.

Fatemi added that Pakistan can play an instrumental role in promoting peace not only in Afghanistan but in the entire region.

Highlighting Pakistan's unflinching commitment to putting an end to terrorism and militancy, Fatemi stressed that Pakistan has lost more than approximately five thousand army personnel in the ruthless war against terrorism and has deputed more than 200,000 troops in its Northern Areas and along Pak-Afghan border. Tariq Fatemi further said these troops are being used with full force along with the F-16s by Pakistan Air Force in eliminating terrorist networks and demolishing their hideouts.

Fatemi also underlined a need for dialogue between Pakistan and India to resolve the long-standing issue of Kashmir between both the countries. He mentioned that there is an indigenous, widespread and homegrown uprising in Indian Occupied Kashmir which Indian government is trying to suppress through horrendous human rights violations.

“Over 16,000 Indians have been injured and approximately 600 blinded by using special kind of guns aimed at damaging the eye sight of innocent Kashmiris,” he said. “In addition, the number of ceasefire violations have increased during recent months. These violations are targeted at innocent civilians which is not seen even during war.”