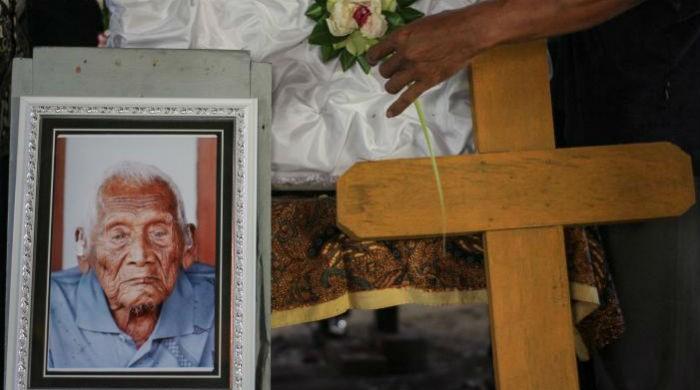 A flower is placed next to the casket of Sodimejo, locally known as Mbah Gotho, who claimed to be the world's oldest person at 146-years-old, during his funeral in Sambungmacan village, Sragen, Central Java, Indonesia May 1, 2017 in this photo taken by Antara Foto. Picture taken May 1, 2017. Antara Foto/Mohammad Ayudha/via REUTERS

An Indonesian man reported to be the world's oldest person died at the age of 146 this week, family members said on Tuesday.

Sodimejo, who was known locally as Mbah Gotho, was born in December 1870, according to a government-issued ID card that media reports said had been verified by local officials in the Central Java town of Sragen.

Sodimejo's grandson said he had been taken to hospital last week because of his deteriorating health.

"The problem was he didn't want to eat or drink," said grandson Suryanto, who like his grandfather, goes by one name.

He then insisted on being brought home, and died several days later, Suryanto said. Sodimejo was buried on Monday morning in a local cemetery.

According to Guinness World Records, Jeanne Calment, a French woman, had the longest confirmed human lifespan. She died in 1997 at the age of 122.