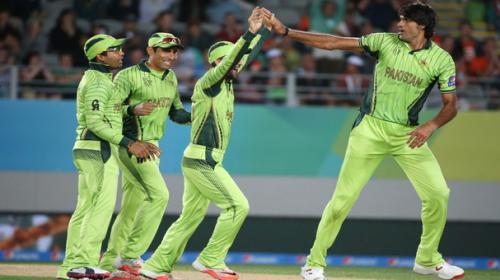 Adelaide: Pakistan coach Waqar Younis described Mohammad Irfan as the team´s X-factor but insisted they can still defeat Australia despite the giant seamer being ruled of the tournament with a stress fracture of his pelvis.

The lanky 7 foot, one inch paceman suffered a fracture to his hip bone and was ruled out of the remaining World Cup matches, including Friday´s mouth-watering quarter-final against the four-time champions at the Adelaide Oval.

"It´s unfortunate that we lost Irfan just at the wrong time," said Waqar on Wednesday.

"It´s a huge loss. He was an X factor for us but we have got to live with it."

Waqar refused to accept that Irfan had not been rested adequately.

"This injury could have happened a long time before, so we can´t say that it happened two days ago, it´s not easy for us but we have to cope with it," said Waqar.

"I am pleased with the performance of the fast bowlers -- Wahab Riaz has taken responsibility and has been delivering and so has Rahat Ali.

"We have been approaching the games very well in the entire tournament. We had a poor start at the beginning but we came back well.

"The bowlers know what to do and they are doing well. Look at the bigger picture, look at what happened in the recent past, losing so many bowlers and some good spinners for other reasons so it´s tough but we are handling that well."

Pakistan´s preparations for the World Cup were badly hit when their ace spinner Saeed Ajmal was suspended due to an illegal bowling action in September last year.

It got worse when spinning all-rounder Mohammad Hafeez was also banned for his action before he injured his calf while pacemen Junaid Khan had to be withdrawn from the 15-man squad a month before the start of the World Cup with a leg injury.

Waqar did not rule out playing leg-spinner Yasir Shah in place of Irfan on Friday.

Shah took 12 wickets in Pakistan´s 2-0 Test series win over Australia in the United Arab Emirates last year -- their first win over the opponents for 20 years.

"We have discussed Shah but we will look at the pitch and if it´s conducive then we will see how it goes," said Waqar, who added he was not worried about facing a tough opponent like Australia.

"Look, we are in a situation where we cannot worry too much. We need to go out and do the best we can. It´s a big game, a quarter-final of the World Cup and we all are very pleased to be here.

"We know Australia play very aggressive cricket and we have to match that."

"We can beat Australia but for that we have to be very positive. We have beaten them in the past, even in the last World Cup (2011) so we can do that again if we play to our strengths." (AFP)

Pandemic not over yet: Cricketers urge nation to stay cautious on Eid