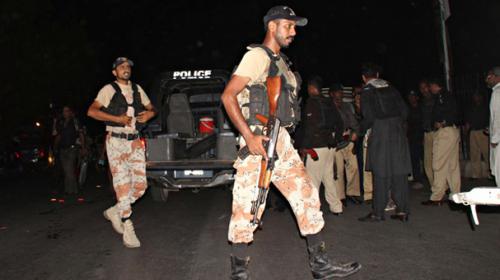 KARACHI: At least 70 suspects were rounded up late on Wednesday in targeted operation conducted in Sohrab Goth, Lasi Goth and areas around Memon Hospital, a Rangers spokesman said.

According to the spokesman, the raids were also conducted at suspected hideouts of banned outfits in Ayub Goth, Machar Colony, Afghan Basti, Janjal Goth, Jamali Goth and Faqeera Goth.

The raids were conducted against the backdrop of gun attack on a bus of Ismaili community that killed at least 45 people and injured several others in Karachi’s Safoora Chowrangi area earlier in the morning.

Between 60 and 65 people were riding the overloaded bus, which belonged to the Ismaili community. The bus was traveling towards Aisha Manzil when it was attacked.

The Rangers spokesman had earlier announced arrest of 18 suspects in raids carried out in Safoora Goth and Sohrab Goth.

Sindh lockdown rules to be relaxed after April 14: Saeed Ghani

Coronavirus outbreak: We will emerge stronger from this challenge, says Gen Bajwa