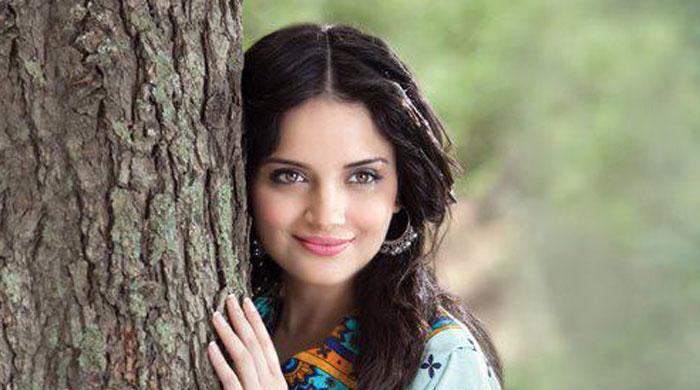 While Sultan has muffled a number of local releases this Eid ul Fitr by dominating a chunk of ticket sales and forcing them to rethink release dates, Eid ul Azha is likely to have more of a full plate. Among the three confirmed local releases for September is Janaan, which has been making news for being Reham Khan’s first film production.

The trailer of the film recently hit airwaves and though it seems to live up to its promise of showing a lighter side to Khyber Pakhtunkhwa, it doesn’t bring anything new to the table – love triangles and changing family dynamics peppered with heavy duty emotional drama are things we’ve all seen many a time. The film’s female lead Armeena Rana Khan, however, disagrees.

“It may seem like a love triangle from the trailer but we all know that trailers can be misleading and may not always give the bigger picture. You’ll be surprised that there are a lot of issues, associated with KPK, discussed in the actual film and there are a lot of twists in the plot. It’s not a simple, boy-meets-girl script,” Armeena asserted. “It’s showing KPK in a positive light which has never been done before in mainstream Pakistani cinema. It’s highlighting all the good things about Pakistan – things that we cherish and hold dear; the traditions and the culture. There is also an element of nostalgia that a lot of Pakistanis abroad will be able to identify with.”

A Canadian-born, Armeena started her acting career with a cross over film and later carved a niche with her girl next door image in Pakistani television. We last saw her in Bin Roye and while critics were fixated on Mahira’s performance, Armeena quietly caught the eye of many producers. In Janaan, Armeena plays the role of Meena, who after living abroad for a long time returns to her hometown Swat for what becomes a journey of self-discovery and reliving forgotten relationships and landscapes. Being brought up in Canada herself, the character hits too close to home for Armeena but does it offer her enough scope to stand on her own?

“Any role that you play is never easy if you play it right. While elements of my own personality have been incorporated, the role was challenging at the same time because I am looking at Swat through the eyes of Meena. There is a whole character arc to follow from start to finish and although I can identify with the character, there are a lot of differences at the same time,” Armeena responded. “For example, Meena is very loud and she is not afraid to throw out her opinions but I am naturally very shy in real life. Though I am ambitious and know what I want, I analyze every detail before making a decision whereas Meena may just jump into an opportunity.”

At a time when artistes will jump at every opportunity of promoting themselves and being plastered on billboards for endorsing a brand just because it brings in good money, Armeena seems to be cut from a different cloth. While at one end actress Aimen Khan has had to receive severe backlash from fans on social media for endorsing a fairness cream, Armeena chose to reject a two-year contract with a different company for the same – a welcome step given how these so-called skincare formulas only feed into societal prejudices.

“I believe artists have certain responsibilities over what we endorse in our society and how we do it. Obviously people are free to make their own choices but personally I believe that I have a responsibility towards all those little girls who follow me. I don’t have the right to tell anyone that you are dark so you need to lighten your skin tone to look beautiful,” she said while sharing the reason behind her decision. “Fairness creams are ethically and morally wrong on so many levels. I am not aware of their scientific side effects but I certainly don’t want to promote something that causes self-esteem issues in young women. A lot of them follow me and young girls are impressionable, they tend to pick a lot from people they idolize so I want to set the right example.”

Though Armeena’s approach comes as a breath of fresh air, it sure is like a drop in an ocean for cinema itself isn’t free of discrimination based on skin colour. Majority of female leads, and even male ones, are fair-skinned while duskier people are sidelined or don’t get the kind of success they deserve. Case in point: Aamina Sheikh. The actress has given us some of the most memorable performances on small screen but even then one is yet to see her in a mainstream film with a powerful presence.

“It’s just such a shame. It’s about time that things changed and people with duskier skin tones were given more opportunity. Cinema is inspired by cultural preferences so the culture has to change from the grassroots level. As long as the culture and people’s mindsets dictate that fair is beautiful, it won’t change because if fair skin sells tickets, that’s what going to be preferred unfortunately. So we have to educate people and that can only be done when we set examples and I want to start that initiative,” Armeena added.

As our discussion moved on towards empowering those subdued in our culture, including women in general, I couldn’t help but ask Armeena about her take on the disappointing depiction of women on our television screens. After all its as much a responsibility of an actor to shun such damaging projects as it is of a writer and director to not make serials that hinder the progress of our society and have an adverse effect. Given that we have seen Armeena play the submissive, girl next door time and again, is that all her fans should expect from her in future?

“These days, in our dramas, rapists are glorified, domestic abuse is prevalent and the woman is a bechari. And I cannot identify with that. I know it’s an actor’s job to explore all sorts of roles but I have explored all of it and I find nothing challenging in them anymore. I don’t want feed into stereotypes that I am a bechari woman and I cannot do anything without a male actor’s help. Yes, there are moments of brilliance like in the case of Udaari, but most of them are just identical scripts. I want to do roles that break and challenge stereotypes and tell women that yes you can!” she maintained.

“Media is a very powerful medium because the public will open to whatever you sell them. It needs to use its power to tell girls that their whole lives don’t have to revolve around marriage aspirations; they can aspire to be something else. Where is the self-discovery? Media has the power to bring change but unfortunately right now the part it’s playing is more negative than positive.”

For that reason alone, Armeena has rejected a total of 11 television offers this year. And at the same time she has also refused four films including those from Bollywood. It seems that unlike most of her contemporaries, Armeena’s ambitions go beyond that of venturing into Bollywood, which often, she feels, does not match her principles in life.

“The offers from Bollywood weren’t up to my taste; they didn’t tie up with what I believe in. I am not averse to Bollywood but it has to match my principles because I am being watched by thousands of little girls. I don’t want to go down the road where I am a poster or a page 3 girl for three to four years; I have a shelf life and then I am finished. And in those years I have only objectified women a little bit more. I want to make sure that I take on empowering roles that set an example that women can be anything they want and not just be second fiddle to some guy, helping him fulfill his dreams,” Armeena disclosed while reveling the details of Bollywood offers.

“Besides, I am also very West-facing. I have more British TV, Canadian TV or LA aspirations and not so much for Bollywood. And anywhere I go I want to take my Pakistani identity with me. I want to represent it on an international platform if given the opportunity and highlight our culture in the correct way.”

Though a popular face on television, Armeena has yet to prove her abilities on the big screen in a leading character. Janaan, in that respect, will be the moment of truth. The trailer of the film has already garnered over 400,000 views over the weekend with some positive feedback from fans. But whether it lives up to expectations and manages to bust assumptions of a clichéd, hackneyed plotline remains to be seen. The actress will next be seen in a British short film Achilles Protocol in a role she feels is still beyond the scope of local cinema, and also in the long-delayed war saga, Yalghaar.

Do you know 14 prime ministers have served under Queen Elizabeth?