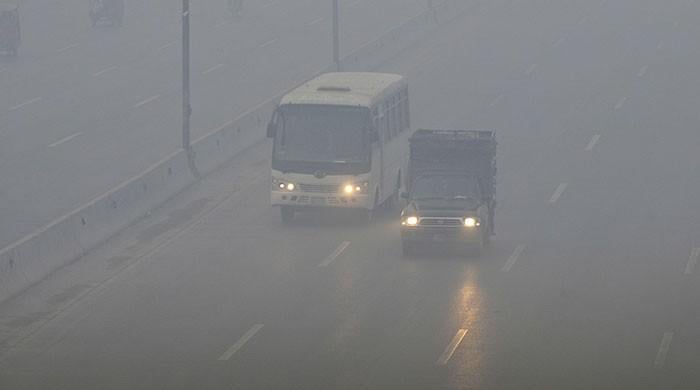 LAHORE: The prevailing smoggy weather condition is likely to continue in the months of November and December with its light and heavy waves across the province of Punjab, Chief Metrologist Mohammad Riaz told APP here on Friday.

However, the pressure of the smoggy situation has currently been reduced and its density decreased especially during day times, he added.

To a question, he said that complete eradication of the smog depends on the rain which is not expected in the next few weeks.

“Less than average rainfall is expected in November and December, therefore, smog fog and mist will remain prevalent and higher concentration of smog is expected in urban areas”, he added.

He has set up a high-level committee to consider environmental conditions caused by smog in some cities of Punjab and for suggesting precautionary measures in this regard.

The government of Punjab is considering a proposal to shut down schools as smog has gripped parts of the province igniting health fears and causing road accidents.

Advisor to CM on Health Salman Rafiq told the media on Thursday the government may announce temporary closure of schools to prevent children from toxic smog.

Meanwhile Secretary Environment Saif Anjum urged the patients of asthma and those having respiratory problems to avoid the exposure of smog.

Health experts said that smog can cause eye and ear allergies advising people to wash them with clean water several times daily.

According to the Provincial Monitoring Cell of Punjab, Emergency Service (Rescue 1122) at least 17 people died in different smog-related incidents in Punjab on Friday while the haze has resulted in outbreak of diseases in several cities of the province.

At least two people were killed and five others injured on Friday when two trucks collided near Harappa Sahiwal.

The citizens were found complaining about breathing issues throat infection and pneumonia.

An increase in the number of patients is being observed at hospitals with particularly young and elderly people in the majority among them.

Health experts have advised the people to avoid going out unnecessarily and recommended wearing masks and glasses while in open.

It was further recommended that the heart and lungs patients should take steam regularly and avoid cold beverages.

The Motorway authorities have advised masses to travel at low speed and use fog lamps to avoid accidents.

It is also advised to travel in groups and maintain a distance between cars.

Punjab Rescue Services Director General Dr Rizwan Naseer has advised people to avoid unnecessary travel and called upon drivers to use special lights during foggy or smoggy season especially when the visibility level reduces to zero on highways and motorways.

He asked drivers also to use proper indicators and avoid stopping in the middle of the road while travelling on highways and motorways.

He also asked motorcyclists and pedestrians to use masks wet handkerchiefs to cover their mouths and goggles to cover eyes to save themselves from any respiratory problems during smog.

The Met office has predicted light rains in some parts of Khyber Pakhtunkhwa and upper Punjab during the next 24 hours bringing some temporary relief to people.