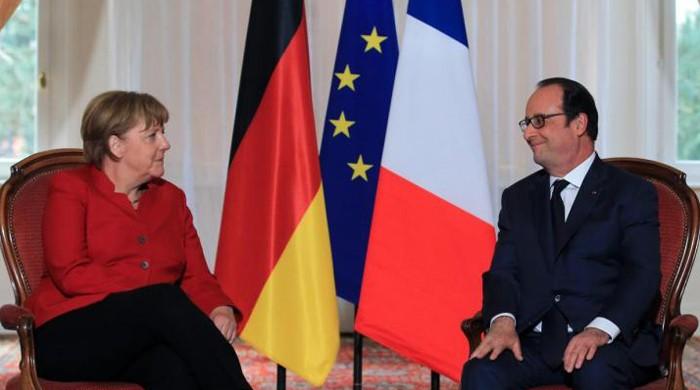 VALLETTA: European Union leaders voiced concerns about US President Donald Trump at a summit in Malta on Friday, saying they needed to stick together to face an increasingly uncertain global future.

The 28 countries showed a flash of unity by backing a plan to curb mass migration from Libya by helping the north African state´s coastguard to stop boats making the dangerous crossing to Italy.

But worries about the new US administration overshadowed the talks, with French President Francois Hollande slamming Trump´s "unacceptable" comments backing Britain´s decision to leave the EU.

"He shouldn´t meddle in in the European Union´s business," Hollande told reporters.

"It is unacceptable that there should be, through a certain number of statements by the president of the United States, pressure on what Europe should or should not be."

Other leaders said that while they wanted to maintain transatlantic ties they also had to be realistic faced with a president who has backed further exits from the EU and called NATO "obsolete".

"Obviously there was some concern on some decisions taken" by Trump, said Maltese Prime Minister Joseph Muscat, the summit´s host, but there was still a "sense we need to engage with the US."

British Prime Minister Theresa May, German Chancellor Angela Merkel and Hollande all briefed their colleagues on their contacts with Trump, with May saying Trump was "100 percent committed" to the NATO alliance.

Rhetoric had run high in the lead-up to the meeting with EU President Donald Tusk listing Trump with Russia, China and religious extremism among the main "threats" to the EU in a quickly-changing world.

He toned down his comments on Friday, saying that US ties were the EU´s "highest political priority", but still stressed that Europeans would have to stand on their own feet now.

"We know that today we have no other option than to regain confidence in our own strength," Tusk added.
Trump´s ban on arrivals from seven mainly Muslim countries has caused particular concern in Europe, with Austria´s Chancellor Christian Kern saying it was "highly problematic."

The EU still faces its own migration problems, and the Malta summit was billed as a major step forward on tackling the Libyan route over which more than 181,000 people risked their lives last year.

Attention has turned to north Africa after the EU managed largely to shut the route Syrian refugees have taken to Greece over the Aegean, thanks to a controversial deal with Turkey.

As the EU leaders boarded a luxury yacht to cross Malta´s historic harbour to their lunch venue, rescue ships off Libya saved hundreds more people including babies from rickety boats on Friday.

"It´s an absolute nightmare in the Med right now," said the charity Doctors Without Borders (MSF).
The EU leaders signed off on a new strategy to "break the business model" of traffickers who helped 181,000 mainly African economic migrants enter the EU via Libya and Italy last year.

The plan involves funding and training the Libyan coastguard to make it better able to intercept migrant boats before they reach international waters, and helping neighbouring countries to close routes into Libya.

The EU will also enlist the help of nomadic tribes in southern Libya to stem the flow over the border, Muscat said.

Italy meanwhile reached an agreement with Libya to establish an EU-funded camps for illegal immigrants pending their deportation to their home countries.

Rights groups however warned that sending boats back to Libya could result in children being sent back to squalid detention centres.

The summit wrapped up with leaders -- minus Britain´s May -- discussing a major declaration on the EU´s future that they plan to unveil at a summit in Rome in March marking the 60th anniversary of the bloc´s founding treaty.

The twin shocks of Brexit and Trump´s election have prompted deep soul-searching in the EU about its place in the world, and how to counter populist and eurosceptic movements that want to dismantle the bloc.

Belgian Prime Minister Charles Michel told Time magazine in an interview that it was time for the EU to take "very strong decisions".

US Election 2020: Melania Trump 'yanks' her hand away from Donald Trump's