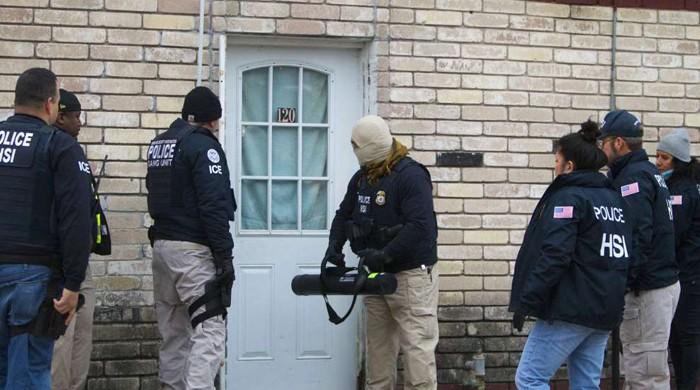 WASHINGTON: US immigration authorities have taken into custody couple of hundreds of undocumented immigrants in at least six states this week in a series of raids that marked the first large-scale enforcement of President Trump’s order to crack down on the estimated 11 million immigrants.

But Gillian Christensen, a spokeswoman for the Department of Homeland Security, which oversees Immigration and Customs Enforcement (ICE), said they were part of “routine” immigration enforcement actions. ICE dislikes the term “raids,” and prefers to say authorities are conducting “targeted enforcement actions.”

Immigration activists said the crackdown went beyond the six states DHS identified, and said they had also documented ICE raids of unusual intensity during the past two days in Florida, Kansas, Texas and Northern Virginia.

“This is clearly the first wave of attacks under the Trump administration, and we know this isn’t going to be the only one,” Cristina Jimenez, executive director of United We Dream, an immigrant youth organization, said Friday during a conference call with immigration advocates.

ICE agents in the Los Angeles area Thursday swept a number of individuals into custody over the course of an hour, seizing them from their homes and on their way to work in daytime operations, activists said.

Some activists suggested that the raids might be retaliation for those cities’ so-called “sanctuary city” policies. A government aide familiar with the raids said it is possible the predominantly daytime operations — a departure from the Obama administration’s night raids — meant to “send a message to the community that the Trump deportation force is in effect.”

Immigrant rights groups said they were planning protests in response to the raids, including one Friday evening in Federal Plaza in New York City, and a vigil in Los Angeles.

“We cannot understate the level of panic and terror that is running through many immigrant communities,” said Walter Barrientos of Make the Road in New York City, who spoke on a conference call with immigration advocates.

“We’re trying to make sure that families who have been impacted are getting legal services as quickly as possible. We’re trying to do some legal triage,” said Bob Libal, the executive director of Grassroots Leadership, which provides assistance and advocacy work to immigrants in Austin. “It’s chaotic,” he said. The organization’s hotline, he said, had been overwhelmed with calls.