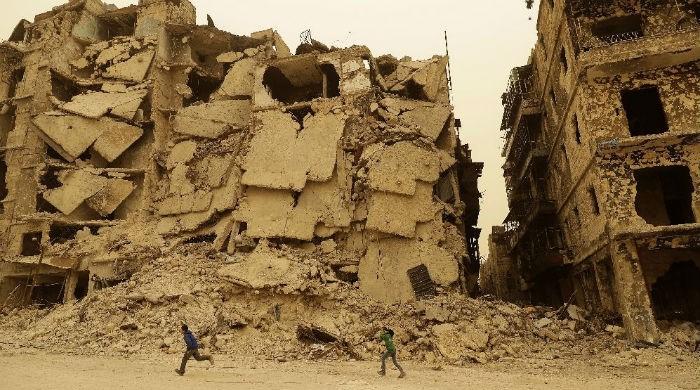 A view of the war-wracked Aleppo, Syria. Photo: AFP/file

WASHINGTON: President Donald Trump's revamped travel ban is facing its first major legal setback, after a federal judge halted enforcement of the directive that would deny US entry to the wife and child of a Syrian refugee already granted asylum.

In a preliminary restraining order issued on Friday that applies only to the Syrian man and his family, US District Judge William Conley in Wisconsin said the plaintiff "is at great risk of suffering irreparable harm" if the directive is carried out.

The man chose to remain anonymous because his wife and child are still living in war-wracked Aleppo.

The order marked the first ruling against the revised directive, which temporarily closes US borders to all refugees and citizens from six mainly-Muslim countries.

It denies US entry to all refugees for 120 days and halts for 90 days the granting of visas to nationals from Syria, Iran, Libya, Somalia, Yemen and Sudan.

The new order, unveiled Monday, is due to go into effect March 16. Lifting an indefinite Syrian refugee travel ban and reducing the number of blacklisted countries by removing Iraq, it replaces a previous iteration issued in January that was blocked in federal court.

"The court appreciates that there may be important differences between the original executive order and the revised executive order issued on March 6, 2017," Conley wrote.

"As the order applies to the plaintiff here, however, the court finds his claims have at least some chance of prevailing for the reasons articulated by other courts."

He set a hearing for March 21.

In another legal challenge, the American Civil Liberties Union filed a complaint on behalf of several refugee assistance groups over the controversial executive order.

"Putting a new coat of paint on the Muslim ban doesn't solve its fundamental problem, which is that the Constitution and our laws prohibit religious discrimination," said Omar Jadwat, director of the ACLU's immigrant rights project.

"The further President Trump goes down this path, the clearer it is that he is violating that basic rule."

The ACLU, the preeminent US civil liberties group, and the National Immigration Law Center brought the suit on behalf of the International Refugee Assistance Project and the refugee resettlement group HIAS, as well as several individuals.

The suit alleges that the new executive order violates the constitutional protection of freedom of religion in that it is "intended and designed to target and discriminate against Muslims, and it does just that in operation."

"Rarely in American history has governmental intent to discriminate against a particular faith and its adherents been so plain," the complaint says, alleging the new order will cause "irreparable harm" and asking for an injunction.

A federal judge in Maryland, Theodore Chuang, has scheduled a hearing in the case for March 15 -- the day before the measure is due to take effect.