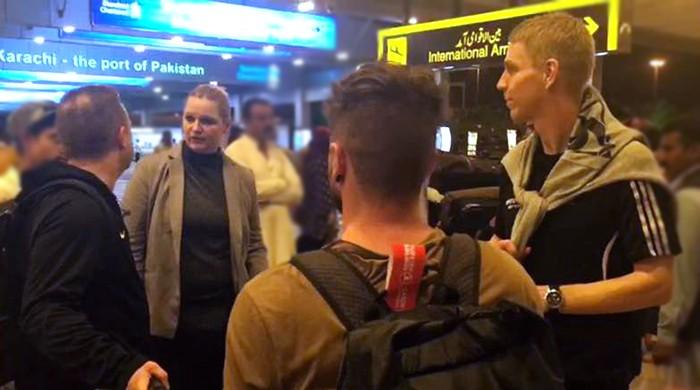 KARACHI: A four-member delegation, including two top football coaches from Germany, have arrived in Pakistan to train young footballers on a 10-day visit of Karachi.

The program has been organised by Karachi United Football Club in collaboration with Pakistan to Germany Study and Eurasia institute of Germany, under which local Footballers in Karachi would get skill training from German coaches.

Senior coach from the club FC Union Berlin, Sebastain Lejeune, feels that Pakistani Footballers are equally talented and with proper training they can also achieve laurels in global football.

Lejeune said that he was looking forward to know more about Pakistan Football and hoping to see some great talent in Pakistan.

“It will be difficult, it is short amount of time to make a bigger influence, but it is good to have an exchange, it would be profit for both sides,” Rathenow said while talking to geo.tv.

“To be honest I have very less knowledge about Pakistan football but I am curious to know about it, want to watch some games if there are any being played. I but would like to know about them,” he added.

Andrew Geddas of Germany’s Eurasia institute said that the trip is aimed at developing interests of Football in people of Pakistan, which is generally obsessed with love for Cricket.

“Cricket is the main sport here, but we are going to change that with small steps, getting people interested in Football, specially the youth,” he said.

“We are connecting the continents thru cultural and language of sports, and brining young people thru sports, really looking forward to this visit for soccer training program here with Union Berlin and Karachi united,” he added while elaborating purpose of the visit.