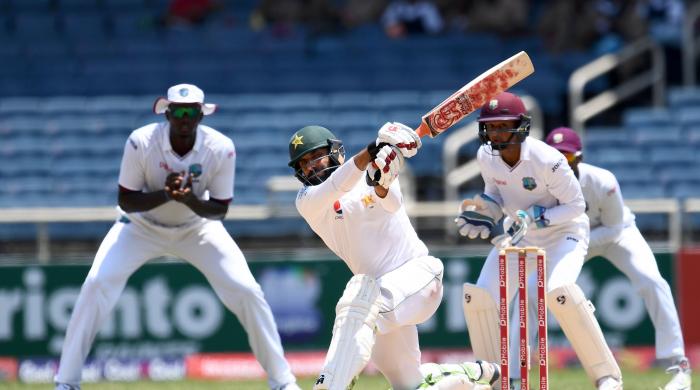 Misbah smashed two back-to-back sixes off leg-spinner Devendra Bishoo to complete Pakistan’s seven-wicket win, which is 25th under his leadership.

Since then he has won 11 more matches, leaving top captains like Mohammad Azharuddin, Ian Chappell and Saurav Ganguly behind him. The win at Jamaica helped Misbah surpass Michael Clarke, Andrew Strauss and Alastair Cook in the list successful Test captain.

The trio of Strauss, Cook and Clarke have led their respective teams to 24 victories in Test cricket, each.

Misbah is just two wins short of joining India's MS Dhoni on the list to become jointly the most successful Test captain from Asia.

Dhoni has won 27 Tests, and next two matches in the on-going Test series gives Misbah a good opportunity to achieve this feat before he retires from international cricket.

In the first innings of Jamaica Test, Misbah smashed three sixes, making him oldest ever to smash three or more sixes in an innings of Test cricket, aged 42 years and 331 days.

He also holds the record for most sixes in Test matches after celebrating the 40th birthday, with 43 sixes. Second to him is Clive Lloyd with just 6 sixes in the filtered age bracket.

He is also the oldest captain to win a Test in last 70 years, and overall, the third oldest after WG Grace and WR Hammond to win a Test match.

He surpassed the trio of Inzamam ul Haq, Javed Miandad and Mohammad Hafeez in the list of numbers of unbeaten innings for Pakistan while chasing a target successfully.

Younis Khan with eight unbeaten innings while chasing leads the list and Misbah is now second on this list.