11 martyred, 46 injured in firing by Afghan forces at Chaman border

CHAMAN: At least 11 were martyred and 46 injured early Friday when Afghan border forces opened fire on Frontier Corps Balochistan soldiers deployed for security of census team near the Chaman border.

Earlier, the Inter-Services Public Relations statement said one civilian was martyred and at least 18 injured in the cross-border firing and shelling. The injured included four FC soldiers who were on security duty of the population census team.

Earlier in the day, Deputy Medical Superintendent at Civil Hospital Dr Akhtar confirmed nine civilians had died and 42 had been injured as a result of the firing and shelling.

Deputy Commissioner Qaiser Khan earlier said a woman was killed when a mortar shell fell on her house.

He also said all schools in the locale had been closed for an indefinite period. He advised residents to avoid going to the rooftops of their houses, following the incident.

According to the ISPR, the exchange of fire between the two sides has now come to a stop.

The unprovoked firing by Afghan forces, with both light and heavy arms, began at 4 AM, security officials said earlier. Pakistani security forces at the time effectively responded to the firing and shelling from the Afghan side, security personnel said.

Large contingents of FC and Levies reached the area as soon as the vicinity came under heavy fire from across the border.

The Pakistan military's media wing said the Afghan Border Police have been creating hurdles since 30th April in the conduct of census in the divided villages of Killi Luqman and Killi Jahangir in Charnan area on Pakistani side of the border.

"This was done despite the fact that Afghan authorities had been informed well in advance and coordination was carried out through diplomatic and military channels for conduct of census," the ISPR said.

Chaman shares a border with the Afghan province of Kandahar and is home to a busy international border crossing between the two countries. The Chaman border crossing was closed following the incident.

The funeral prayers for Shaheed Sepoy Hasan Ali were offered at Quetta Garrison.  Sepoy Hasan    embraced martyrdom today due to Afghan Border Police firing in Chaman, the ISPR said in a statement.

The body of the martyred soldier will be taken to his native town for burial with full military honour, the statement added.

According to the ISPR, a hotline contact between Pakistan and Afghan Director General Military Operations was established later in the day.

The Pakistani DGMO told his counterpart that the villages are divided i.e. situated on both the sides, but Pakistani forces and civilians are present on their own side of the border, said the ISPR statement.

Afghan Director General Military Operations acknowledged that the border lies in between villages. He agreed to take up the matter and issue necessary orders accordingly.

In his weekly briefing, Zakaria said the FO has serious concerns over the incident. The census team was performing its duty when the firing started, he said.

The spokesperson said that Afghanistan had been informed of the census activity before, and the census was being conducted in Pakistan’s territory.

Pakistan has the right to retaliate, he said, adding that a negative role by India was creating issues in Afghanistan.

The injured were taken to the district hospital, where two critically injured persons were referred to Quetta, where emergency has been imposed at hospitals.

The doctors and paramedics at Bolan Medical Complex have been alerted, while additional staff was called for Quetta Civil Hospital.

However, there was a lack of ambulances in Chaman, where casualties are likely to increase in the villages situated near the border. 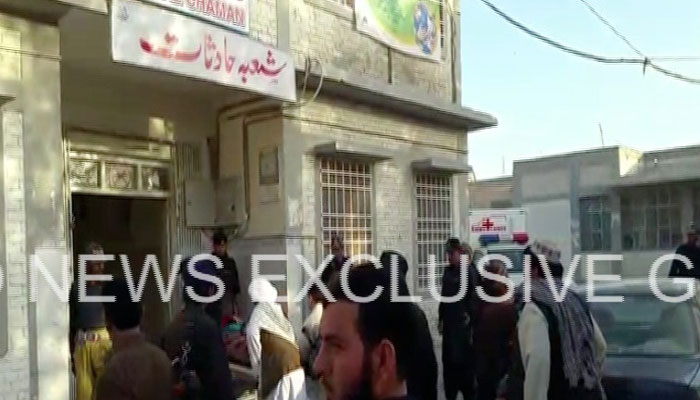 Moreover, the important routes in the areas have been closed, while the vehicles coming from the side of Quetta were stopped, said security officials.

The Quetta-Chaman road was blocked by security forces at various locations following the incident.

Even the 3G and 4G services were suspended in the area.

The census process in two villages near the border, Killi Jahangir and Killi Luqman, has been halted for the time being.

As per the ISPR press release, the Afghan border police had been creating hurdles in the census process since April 30 in the villages near Chaman.

This was done despite the fact that Afghan authorities had been informed well in advance and coordination was carried out through diplomatic and military channels for census, the statement read.

The gate between both the countries on the Chaman border, Bab-e-Dosti was closed following firing from the Afghan border police.

Tensions between both the countries have resulted in the temporary closure of the gate in the past as well.

After the attack on the shrine in Sehwan, Sindh in February this year the border gate was closed. However, it was reopened and the move was welcomed by traders especially as the closure had caused losses to their businesses.

In June 2016, an army major was martyred and two Khasadar men wounded due to unprovoked firing by the Afghan border forces at Torkham border crossing.

The unprovoked fire had come at the time of construction of a gate inside Pakistani territory to check terrorists' movement across the border.

The flare-ups at the border led to imposition of curfew in Landikotal and Torkham areas, restricting all sorts of transportation across the border.

Nine civilians, including women and children, were also wounded in the incident.

With additional input from our correspondent in Quetta