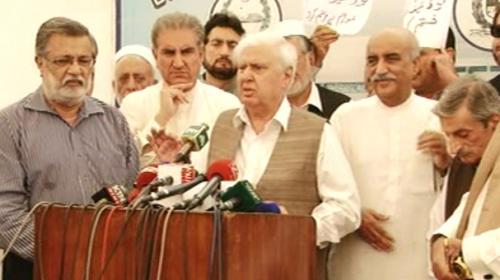 ISLAMABAD: The heat wave coupled with prolonged hours of load shedding has already claimed over 150 live in Karachi alone. Due to the power outages water has become scarce and where it is available, even the cold taps are running hot.

Members of the opposition parties in the national assembly also flared up against the government in unison on Monday outside the parliament house, taking turns to lambast the government at its failure to fulfil the tall promises it had made.

Leader of the Opposition in the National Assembly, Syed Khursheed Shah began by first pointing out, that he felt his party’s failure was its inability to address the water and power woes of the people. He emphasised that the prime minister had promised that there will be no load shedding during the month of Ramazan has seen no limits. He pointed out that across Pakistan over 250 people have lost their lives due to the heat. He concluded that in light of the government’s failure, the members of the opposition parties have gathered to further highlight their protest against the government.

Pakistan Tehreek-e-Insaf (PTI) Vice Chairman Shah Mehmood Quraishi carried the baton forward highlighting that while load shedding has been a long standing problem in Pakistan, never have the power outages been soon long, that 100’s of lives were lost due to heatstroke. Quraishi told journalists that he has received complaints from Tharparkar where there has been no electricity since the 16th of June. He criticized the government for having doubled the power-tariff but failed to address line-losses. They paid a hefty amount for clearing the circular debt but once again the dues have risen to 300 billion, Quraishi added.

The baton was carried next by Mutahida Qaumi Movement (MQM) leader Rashid Godil who emphasized the importance of water and power as basic necessitates. He came down hard against the government saying when Karachi’s water and power woes are raised before the treasury benches they respond, that KElectric (the primary power distributor) has been privatised. He criticised the Prime Minister and Finance Minister Ishaq Dar; complaining that they don’t even have time to meet with elected representatives from the city that provides 68% of the revenue to the government. He alleged that the government is only interested in projects that make it look good – citing the metro bus project.

Next in the line-up was Jamat-e-Islami leader Sahibzada Tariq Ullah who complained that his province is facing 22 hours of load shedding. He criticised State Minister for Water and Power Abid Sher Ali’s statement citing problems with the transmission lines and demanded to know why it took the government two years to figure out that there was a problem with the transmission lines. He added that the government has made some tall claims and promises but he feels even the remaining three years will pass but they will not be able to control load shedding in Pakistan.

Sheikh Rasheed followed the JI leader and minced no words in terming the government ‘liars’ while Aftab Sherpao complained that in his province mosques have run out of water, adding that they had been screaming since before Ramazan but their calls fell on deaf years.

The prime minister had promised that there would be no load shedding during Sehri and Iftari during the holy month. However since the very first day of Ramazan over all load shedding in a 24-hour span has increased and consumers have been forced eat in candle light whether it is at 4:00 AM or 7:00PM