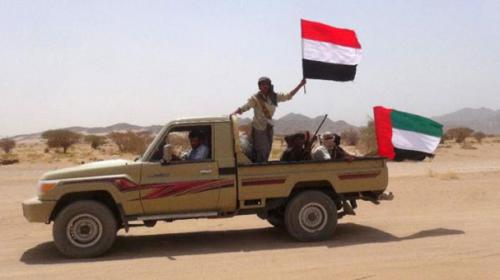 MARIB: Loyalist forces in Yemen backed by a Saudi-led coalition killed at least 20 Iran-backed insurgents Saturday, the military said, as they pressed their offensive on the rebel-held capital Sanaa.

Twelve other rebels were captured in the operation launched on the northwestern edge of Marib province, a key battleground in the fight for control of the capital, said a military official

"Loyalist forces, supported by coalition aircraft, have made a slight advance" in the northwest of Marib, Abda al-Subei, of the provincial security forces, told AFP.

Subei said Saturday´s operation came a day after coalition air strikes on rebel positions.
He did not elaborate on the overall progress of the offensive.

But another Yemeni officer, Murad Turiq, said ground forces came across land mines planted by rebels and were also having difficulty moving through the mountainous region.

Meanwhile, a senior Saudi officer and another border guard were killed in a gun battle after a landmine blast along the frontier with Yemen, the interior ministry said.

Colonel Hassan Ghasoum Ageeli and a sergeant died late Friday in the Jazan district, and four other guards were lightly wounded, a ministry statement said.

Ageeli is one of the most senior Saudi officers killed since March when the kingdom formed the coalition.

After backup arrived, "they were subject to heavy shooting from several locations inside the Yemeni border," sparking a firefight, it said.

Saudi Arabia feared the Huthis would take over all of neighbouring Yemen and move it into the orbit of the Sunni kingdom´s Shiite regional rival Iran.

But the rebels have lost territory since late July when the coalition began deploying ground troops in support of local forces.

Hadi returned to the southern city of Aden Tuesday vowing to "liberate" the whole country.

In June, a Saudi lieutenant colonel died in a landmine blast in Jazan, while a general in August became the highest-ranked Saudi fatality when he was killed in cross-border fire.

Around 70 people have been killed in Saudi Arabia from border shelling and skirmishes since the coalition campaign began. Soldiers have accounted for most of them.

The United Nations says nearly 4,900 people, including a vast number of civilians, have been killed in Yemen since late March.