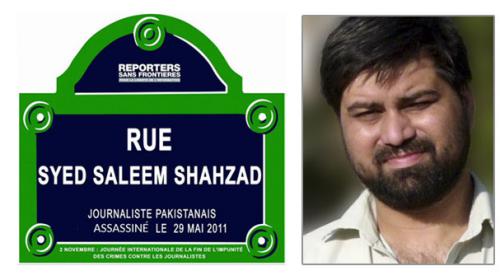 In a protest to mark the International Day to End Impunity for Crimes against Journalists (2 November), international organisation Reporters Without Borders (RSF) on Monday renamed 12 streets in Paris after journalists who have been murdered, tortured or disappeared.

One of the streets has been named after Pakistani journalist Syed Saleem Shahzad, who was kidnapped, tortured and killed in Islamabad four years ago.

Shahzad wrote about terrorism and security for the Asia Times Online and other publications. The 40-year-old reporter's body bore signs of torture when it was found two days after he had gone missing in May 2011.

“The cases of impunity that we are presenting are terrible symbols of passivity or deliberate inaction on the part of certain governments,” RSF secretary-general Christophe Deloire said.

"This International Day is an occasion for paying homage to the victims and for reminding governments of their obligation to protect journalists and to combat impunity. Those who target journalists will one day be held to account for their actions," he said.

The United Nations marks November 2 as the International Day to End Impunity for Crimes against Journalists, to reaffirm its commitment to advocate for the safety of journalists throughout the world.

The day serves to remind us of unresolved crimes against journalists, and draws attention to unsolved cases where violence has been used against journalists who are simply exercising their freedom of expression and duty of reporting.

According to RSF, nearly 800 journalists have been killed in connection with their work in the past ten years, 48 of whom were killed since the start of 2015. The organisation is calling for the appointment of a special representative to the UN secretary-general on the safety of journalists.

Motorway rape case: Every district in Punjab mobilised in manhunt for Abid Malhi