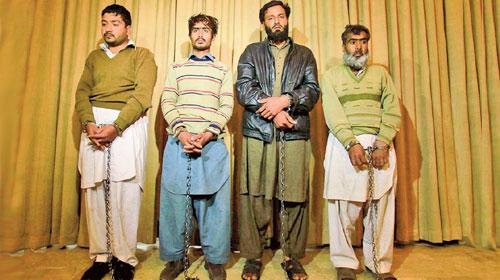 PESHAWAR: Lt Gen Asim Salim Bajwa, Director General of the Inter-Services Public Relations (ISPR), said on Saturday that facts about the Bacha Khan University attack have been placed before all, and everyone will soon witness what happens regarding action against terrorists.

The Pakistan Army spokesman, during a press briefing here at the heavily-guarded Corps Headquarters, said the law-enforcement agencies had arrested five facilitators of the attack on the university in Charsadda in which 21 people, a majority of them students, were killed along with two teachers.

“The law-enforcement agencies have constantly been conducting intelligence-based operations, particularly after the attack on the Bacha Khan University. They captured five facilitators of the terrorist attack on the university,” he said.

The facilitators picked up by the security forces were presented before the media after the press conference. Two of them were bearded and the remaining looked younger.

He said one of the four main facilitators, whom he called ‘Facilitator A’ and avoided disclosing his identity, was still at large, adding that the law-enforcement agencies were making all-out efforts to find him, his wife and niece.

Lt Gen Asim Bajwa said the main facilitator played an important role and through his wife and niece brought arms and ammunition for the terrorists from the gun-manufacturing town of Darra Adamkhel to Charsadda. He said the facilitator, in hiding so far, belongs to Mardan.

The ISPR chief said the identity of one of the four attackers has been established through the National Database and Registration Authority (Nadra). “Efforts are under way to ascertain the identity of the remaining three through their DNA analysis,” he added.

He said the terrorists had been identified as Amirullah and as per his Nadra record, he belongs to South Waziristan. He said four terrorists took part in the attack.

Then Adil and Riaz provided them a stay in their houses on the Mardan-Charsadda Road,” Bajwa told reporters. The ISPR chief said besides Adil and Mohammad Riaz, two other facilitators, Ziaullah and his son Akbar, had also been arrested.

He said one of the facilitators, Adil, had played an important role in the attack on the university.

Lt Gen Asim Bajwa said Adil had worked as a mason in the university and provided and shared with the terrorists the internal map of the university.

“Before the attack, Adil brought the terrorists to the same village where the university is located and showed them the area. On the day of the attack, another facilitator Noorullah brought them in his auto rickshaw and dropped them at the sugarcane field from where they entered the university campus and started killing students and teachers,” he said.

The military spokesman said the attack on the university was planned and controlled from Afghanistan.

He said the four terrorists were identified as Omar, Usman, Ali Mohammad and Abid.

He said their main handler, Omar Mansoor, was using an Afghan SIM and had made 10 telephone calls to the terrorists during the attack.

“No terrorist act is possible without facilitation. These detained people are equally responsible for the killing of innocent people in the university,” he stressed.

“Terrorism is a major challenge to us but we have to defeat these terrorists to restore the writ of the state. The terrorists are trying to create disappointment among us but we need to get united against them,” he said.

He pointed out that the security on the Pakistan-Afghanistan border was a major challenge to both countries.

“We have a 2,600 kilometre border with Afghanistan. It isn’t possible to seal it. Yes, security can further be improved. Border management is a permanent issue. We need to ensure 100 percent security on the border,” he contended.

“There are unknown routes as well and efforts are being made to improve security,” he said.

“The army chief had stated that 2016 is the last year of terrorism. This is January and we are determined to eliminate terrorism from Pakistan. Terrorism is a worldwide issue,” he maintained.

He said the security agencies had conducted 14,000 intelligence-based operations, killed 200 terrorists after the APS attack during resistance in raids and captured 21,000 other terrorists.

He added that they reviewed the security situation and progress of the investigations into the attack on the university.

They also reviewed operations in Fata and parts of Khyber Pakhtunkhwa and Pakistan-Afghanistan border management.

NNI adds: Director General (DG) Inter-Services Public Relations (ISPR) Major General Asim Bajwa said one of the calls was traced during the attack which was made by a facilitator from Afghanistan (number 0093774021675) to a reporter in Pakistan.

The terrorist told that reporter that the people who have attacked the university in Charsadda were his men. The reporter responded saying that it was a university and the matter looked like the Army Public School (APS) Peshawar. “It s true,” the terrorist said, “but these people are part of the same system due to which we are being targeted”.

When the terrorist was asked how many people had broken into the university, he replied that there were four people and were all in contact with him. The terrorist told the reporter that the Tehreek-e-Taliban Pakistan (TTP) will shortly release the video claiming responsibility for the attack. The reporter asked him if the terrorists inside the university were suicide attackers. The terrorist said that all of them were suicide attackers and were named Umar, Usman, Ali and Abid.

When the reporter told him that two of the terrorists were dead, the terrorist replied that the information was wrong and only one of them had died while the other three were still carrying out the operation.