NAB to decide cases against PM, Punjab CM by March 31 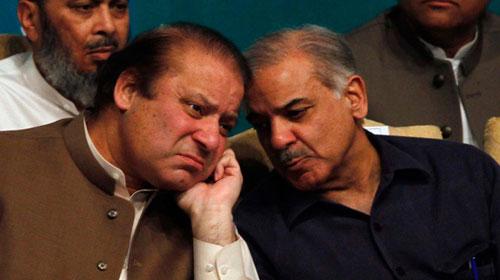 By this deadline, NAB will either decide to mature these cases for prosecution or give a clean chit to the Sharifs in these inquiries, which were initiated almost 15 years ago during the Musharraf era but remained inconclusive.

The NAB had set a deadline of Dec 31, 2015 in the middle of last year for deciding the fate of these cases but the previous deadlines was not met and the director general concerned sought more time i.e. till March 31, 2016.

Like many others, Prime Minister Nawaz Sharif is said to be upset for the reason that these cases are pending with NAB for over a decade now but neither has been cleared nor a formal reference has been made against him.

However, to the credit of Chairman NAB Chaudhry Qamar Zaman, he has devised a strategy to decide the fate of all those cases which are pending since long so that no one is blackmailed or unnecessarily vilified.The present NAB strategy is to either convert the pending investigations into formal references on the basis of solid evidence or drop the inquiries because of inadequate evidence available to prosecute the person alleged for corruption or misuse of authority. Under the same strategy, a large number of inquiries/investigations have either been dropped or turned into references.

As part of the same strategy, the inquiries against Prime Minister Nawaz Sharif are now set to be decided by March 31, 2016. These deadlines are set in all cases of “mega corruption” against politicians, bureaucrats, private individuals, etc.

Two separate investigations are presently under progress against the prime minister. In one of the cases, Nawaz Sharif, Shahbaz Sharif and others are alleged of misusing the authority in the construction of a road from Raiwind to Jati Umra, the residence of the Sharifs. The case is pending with the NAB since 2000, and involves the alleged misappropriation of Rs125 million.

In other cases, the prime minister is accused of making illegal appointments in the Federal Investigation Agency (FIA). This inquiry is pending against him since 1999. The NAB has set the deadline of March 31, 2016 to conclude the inquiry. It will either be disposed of or matured for prosecution.

These cases against the Sharifs were included by the NAB among cases of “mega corruption”, the list of which was presented by the Bureau before the Supreme Court of Pakistan last year.

Among the rulers, besides the Sharifs a case against Finance Minister Ishaq Dar was also shown in the list of mega corruption cases.

Dar’s case was to be concluded by Dec 15, 2015 but the NAB further extended the deadline to Feb 29, 2016. Investigation against Dar was pending with the NAB since 2000. Dar was accused of misusing authority and having assets beyond known means.Following the reflection of these names in the list produced before the apex court by the NAB, the PML-N government strongly reacted and criticised the Bureau.—Originally published in The News