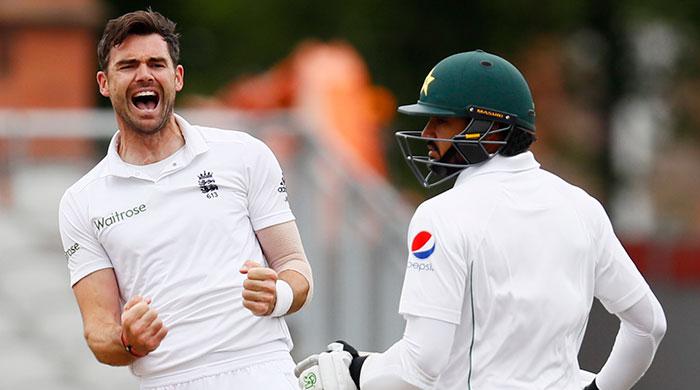 MANCHESTER: James Anderson marked his return to international duty with three wickets as England beat Pakistan by a massive 330 runs to win the second Test at his Old Trafford home ground on Monday.

Pakistan, set a mammoth 565 for victory, were bowled out for 234 in their second innings after tea on the fourth day.

This was England’s fifth-biggest Test win in terms of runs.

But England’s joy in levelling the four-match series at 1-1 was tempered by the sight of all-rounder Ben Stokes going off injured in Monday’s second session.

England’s Joe Root, who made a Test-best 254 in a mammoth first innings 589 for eight declared, was named man-of-the-match.

England’s two senior batsmen combined again in a second innings total of 173 for one declared.

Left-handed opener Cook made 76 not out and vice-captain Root 71 not out, with the duo putting on 105 for the second wicket before the skipper called a halt on Monday morning.

Anderson returning to Test cricket after missing Pakistan’s 75-run win in the first Test at Lord’s with a shoulder injury, then struck twice to remove both Shan Masood (one) and Azhar Ali (eight).

But with Pakistan on the ropes, England saw Stokes injure himself while bowling.

After delivering his second ball of the 22nd over, with Pakistan 68 for two, the Durham pace bowler pulled up with a right calf strain and left the field.

An England spokesman said the 25-year-old Stokes, playing his first international match after suffering a knee injury in the first Test against Sri Lanka in May, would undergo a scan on Tuesday to determine the full extent of the injury.

Off-spinner Moeen Ali, completing the over, was then hit for six by Mohammad Hafeez.

Ali, however, regained his composure to dismiss both Hafeez (42) and Younis Khan (28).

Pakistan’s 83 for three became 102 for four when Younis, trying to loft Ali over the top, was caught at long-on.

It was a reckless shot from such an experienced player given that Pakistan needed to bat time to escape with a draw and that there was man deep in the field waiting for a chance.

But having made a patient 52 in Pakistan’s meagre first innings 198, Misbah was unlucky to fall to Chris Woakes for 35 when he dragged a full toss onto his stumps.

Pakistan were 161 for five at tea and three balls later that became 163 for six when Sarfraz Ahmed was caught down the legside by opposing wicket-keeper Jonny Bairstow off Woakes.

Asad Shafiq made a painstaking 39 before he was lbw to Anderson, England’s all-time leading Test wicket-taker.

Yasir Shah (10), missing with a careless pull, was plumb lbw to Ali.

Root took England to the brink of victory when the part-time off-spinner struck second ball to have Wahab Riaz caught off a top-edged sweep by Cook.

Pakistan were then 208 for nine.

Tailender Mohammad Amir delayed the inevitable with several fine shots, including a flowing extra-cover drive for four off Ali before he holed out off Woakes.

Both Anderson and Woakes took three for 41, with Ali bagging three for 88.

England resumed Monday on 98 for one, already a huge lead of 489 runs after Cook opted against enforcing the follow-on on Sunday.

Cook and Root then plundered a further 75 runs in just nine overs before the declaration.

But at Old Trafford he returned expensive figures of one for 266.