Lawyers stood by democracy but govt oblivious to their security: SC Bar President 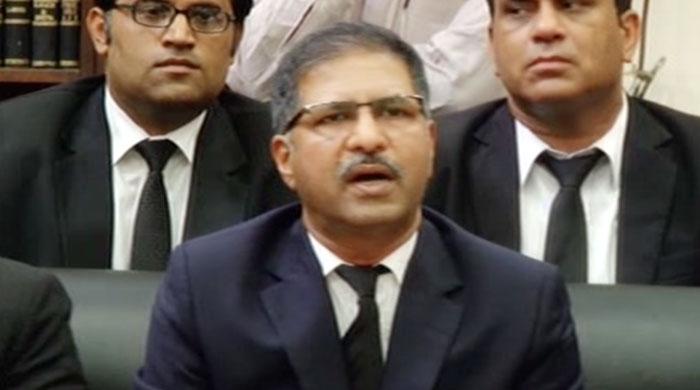 LAHORE: Supreme Court Bar President Ali Zafar condemned the Quetta blast and said lawyers who have always stood up for democracy are targeted.

Addressing a press conference here on Monday, Bar President Ali Zafar said the tragedy is not just an attack on lawyers but an attack on all citizens.

He said lawyers will not just protest the attack but also prepare a long-term action plan.

Zafar further said security is not just the right of lawyers but a basic right of every citizen.

He added that if the government cannot provide security, it should quit the next elections.

“Our brothers in Balochistan had been receiving threats for some time and had said they needed security, but the government did nothing,” Zafar said.

“We have raised our voice again and again that we need security, and we will see to it that our demand is met,” he added.

He vowed not to let the martyrs’ sacrifices go to waste.

SCBA President Ali Zafar says, lawyers will not be deterred by attacks on them | https://t.co/jn3gf1WszU pic.twitter.com/zqnoHVJdc6

At least 53 people were killed and 56 injured when a loud explosion occurred on Monday in Quetta’s Civil Hospital.

The explosion occurred when Balochistan Bar Association President Bilal Kasi's body was being brought to the emergency department. He was gunned down at Mano Jan Road earlier today. Former Balochistan Bar President Baz Muhammad Kakar was injured in the attack. He later succumbed to his wounds at the hospital.

Police said that unknown men opened fire after the blast. Panic tore through the hospital after the incident. The blast occurred near the emergency department of the hospital.

Most of the injured are lawyers and journalists who had arrived at the hospital when they heard news of the attack on the two senior lawyers, eye witnesses said.