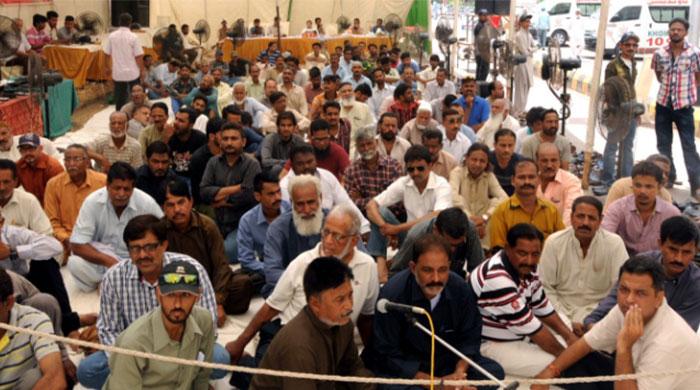 LONDON: Muttahida Qaumi Movement (MQM) chief Altaf Hussain on Monday directed the party workers and leaders to end their hunger strike which began last week against the alleged “atrocities and injustices” committed against the party during Karachi operation.

The development came after a five-member delegation of MQM met with Chief Minister Sindh Murad Ali Shah at the CM House and brought to notice the party's reservations over the operation.

The delegation was led by MQM leader Kunwar Naveed and Khwaja Izharul Hasan.

According to MQM’s Naveed Kunwar, the CM Sindh assured the party leaders that a committee would be formed within a week to oversee the operation.

Kunwar said that the committee would supervise the Karachi operation and look into the missing persons’ case.

He said that the party leaders have been reassured that extra-judicial killings would be investigated.

“We have discussed 20 points and talked about other matters too,” said Naveed.

On August 18, activists and members of the MQM began a hunger strike outside the Karachi Press Club to protest against the alleged “atrocities and injustices” committed against the party over the past three years on the pretext of an operation against criminals in Karachi.

On the fourth day of the MQM's hunger strike, Sindh Assembly Speaker Agha Siraj Durrani had visited the party’s protest camp and said that the CM Sindh would soon call an MQM delegation at the Sindh Chief Minister House to hear their grievances related to the Sindh government.