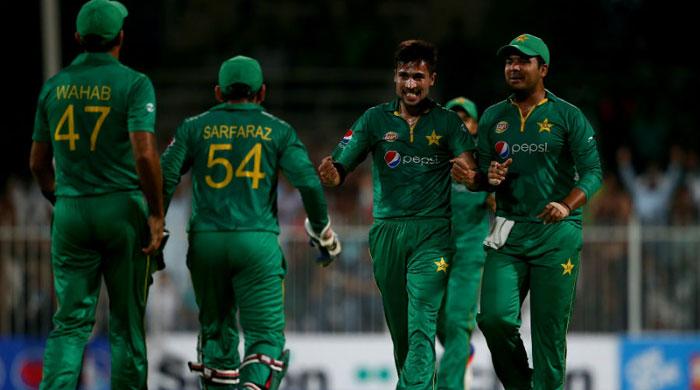 ABU DHABI: Riding on centuries by young Babar Azam and captain Azhar Ali, Pakistan on Wednesday defeated West Indies by a huge margin of 136 runs in Abu Dhabi to complete the series whitewash.

Pakistan, after winning the toss, put a mammoth 308 for 6 wickets in 50 overs, thanks to superb batting by the duo of Azhar and Babar, who added 147 runs for the second wickets.

Although, Pakistan were in a position to score more, they could hit only three boundaries in last 14 overs restricting themselves away from a possible 350.

Babar Azam smashed one six and eight fours for his 117 off 106 balls. This was his third consecutive century of the series, making him only the second player to score centuries in all the three games of a three-match ODI series.

Azhar Ali also returned to form with a much-needed century, scoring 101 off 109 with the help of one six and 8 fours.

Chasing a target of 309, West Indies looked uncomfortable from the beginning. Disciplined Pakistani bowling kept West Indies in hunt for partnerships as the visiting team was bowled out for 172 runs in 44 overs.

Denesh Ramdin was top scorer for the West Indies with 37 off 70 deliveries while Kraigg Brathwaite could add only 32 runs from 44 deliveries.

The win has also helped Pakistan climb one position to 8th in the ICC ODI rankings.