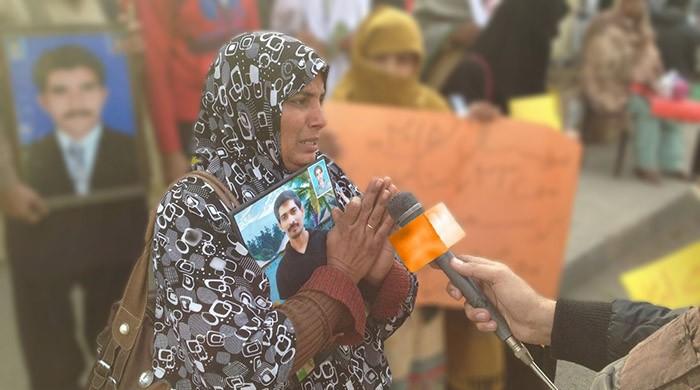 My daughter turns 17 in a few days. She’s looking more and more like her father. She doesn’t realise that, though. She hasn’t seen her father since she was five.

But to be fair, I don’t know what he looks like now either. Perhaps he’s lost a lot of weight. Maybe his hair is all white. He always had trouble with his knees. I hope they don’t bother him still.

My husband, Afzal has in prison in Jeddah, Saudi Arabia since 2005 and on death row since 2009. For 12 years, he has languished behind bars, been tried in a language he does not understand and has never had a lawyer. He could be beheaded any day.

Things were never simple for us. People must have noticed how stressed Afzal was about money (working at a textiles factory in Faisalabad was never going to be good money).

Word travelled and in 2005, his friend, an overseas employment promoter told him he had a solution. Go to Saudi Arabia, he said, you’ll earn twice as much. When Afzal asked him how he would pay for flights, the agent said it’s a one-time investment. You’ll be set for life.

We borrowed money from everyone we knew and eventually put together the amount he needed for flights, his passport, and visa. Proudly, anxiously he handed his friend the envelope. His friend took him to Mardan. That’s where they gather, he told my still unsuspecting husband.

The next time I heard from Afzal was a call.

He told me he was in Saudi Arabia.

He told me he was in jail.

Two years later, another call. He told me he had been sentenced to death.

There was my life before those phone calls, and the death I die every day ever since that phone call.

Afzal’s shaking voice revealed the details. He had reached Mardan at the designated spot. The next thing he knew, he was ambushed and knocked out with an injection and then forced to swallow capsules. He vomited twice but they had relented. They dropped him to the airport, his visa-stamped passport and ticket in hand.

They threatened to kill me, his three children – including his infant son – if he didn’t take the drug capsules to Saudi Arabia. After all, they told Afzal, they knew where he lived.

He was intercepted at Jeddah International Airport. What should have happened at Islamabad Airport ended up happening a few hours too late.

His entire trial was conducted in Arabic. During proceedings, he was asked to sign a paper in Arabic. He had no idea what it said and refused to do so. It turned out to be a confession.

He turned to his fellow prisoners, some of whom understood Arabic. They told him he had to file an objection.
Afzal somehow managed to get this in on time, but despite having the fundamental right to do so, he was denied being present during these hearings.

And so, he was convicted and sentenced to die.

Before he hung up, he asked me to do what seemed entirely possible at the time, “Razia, please bring me home.”

I was only 28 years old. I had three young children and was working day and night at an undergarments factory. But the idea of my husband being beheaded for a crime he was entrapped into committing jolted me into action. I went to the police.

They refused to register a FIR without proof. I had no one. I told them Afzal was in Saudi Arabia. They laughed and said, then he isn’t going to be coming back.

I found lawyers. They all had one thing in common--big bills, big promises and absolutely no clue about how to get my husband back.

I started sending appeals to various government offices, begging them to force the Pakistani Embassy to intervene. I travelled to Lahore and sat outside the Punjab Assembly with signs. I screamed at protests. I shared intimate details of my life on national television, just so someone at the top may listen.

I am not the only woman to lose a loved one to a foreign jail. Forty-five Pakistanis have been executed in Saudi Arabia since 2014. I know this because my son reads the newspaper every day and keeps a tally, terrified that one day he’ll see his own father’s name.

With the support of Justice Project Pakistan, nine other families and I have submitted a petition in the Lahore High Court asking the government to intervene. If they don’t respond to us, they might listen to the courts. They can ask the questions we have been demanding answers to for years--like why have you done nothing to help your citizens?

It chips away at you slowly.

First, you sell your jewelry. Then, your furniture. Before you even know it, you’re at the mercy of your relatives. I have been living with my brother for the last 5 years. I lost my job at the factory after I was hospitalised for a heart attack. I now work as a maid when I can find odd jobs.

In the 12 years that Afzal has been gone, both his parents have passed away. In 2008, my youngest, Ramish, became severely unwell. He died in my arms when he was just two years old. For weeks, I couldn’t bring myself to tell Afzal. Waiting for death is like dying already, and when you lose a child you become a ghost

Afzal and I speak on the phone once a month, twice if we’re lucky.

Sometimes he’ll tell me of other Pakistani prisoners with him to whom the exact same thing has happened. Other times, he just won’t speak. Instead, he’ll just listen to banal details of our home and our children. As if he’s a part of our everyday life, as if he can help us from his jail cell in Jeddah.

If the government of Pakistan stands up for him, or at least investigates the incident, he may just be able to.

*As told to Rimmel Mohydin, the Senior Media and Communications Officer at Justice Project Pakistan

Editor's note: There are an estimated 2,393 Pakistanis in Saudi jails for drug-related crimes. It is the government of Pakistan's responsibility to provide consular access to its citizens abroad and to identify and prosecute the overseas employment agencies involved in entrapment and forced narcotic smuggling.