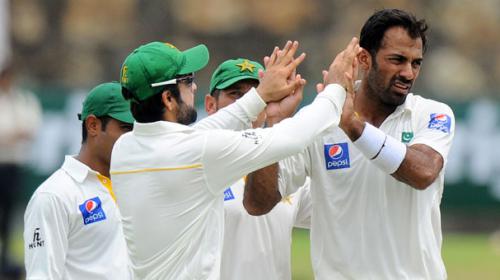 Galle, Sri Lanka: Sri Lanka's opener Kaushal Silva frustrated Pakistan with an unbeaten 80 when the rain-hit first Test finally got underway on the scheduled second day in Galle on Thursday.

Veteran Kumar Sangakkara chipped in with 50 to leave the hosts on 178 for three at stumps after Pakistan captain Misbah-ul Haq elected to field first on an easy-paced pitch.

After inclement weather had washed out the entire first day´s play on Wednesday, just 64 overs were bowled on the second day after a wet outfield delayed the start by two hours at the Galle International Stadium.

Left-handed Dimuth Karunaratne scored 21 in an opening stand of 30 with Silva when he was dismissed by left-arm seamer Wahab Riaz in the 13th over of the innings.

Karunaratne attempted to pull a short ball, but only managed to edge a catch to wicket-keeper Sarfraz Ahmed to provide the tourists a much-needed breakthrough.

Silva and Sangakkara teamed up to add 112 runs for the second wicket, batting through the post-lunch session to take their team to a comfortable 123 for one by tea.

Sangakkara, Test cricket´s current leading run-getter who is expected to retire during the home series against India in August, hit two boundaries and a six.

The prolific left-hander, who took a break from his English county commitments with Surrey to play for his nation, began ominously by driving his first delivery from Wahab to the mid-on fence.

But he fell soon after reaching his 52nd half-century when he edged a drive off Wahab to Younis Khan in the slip region.

Pakistan could have removed Sangakkara when he was on 24, but Azhar Ali at short-leg spilled a sharp chance off leg-spinner Yasir Shah.

The tourists struck again soon after as Lahiru Thirimanne, who scored eight, drove Mohammad Hafeez uppishly to mid-on where Zulfiqar Babar held the catch after juggling with the ball.

Silva, looking comfortable against both pace and spin, stepped closer to his second Test century. He has so far hit 12 boundaries.

Wahab was the most impressive bowler with two for 51, but those figures would have read better if Karunaratne had not been caught off a no-ball in the bowler´s first over.

Later in the same over, Wahab was warned by umpire Paul Reiffel for running on the wicket on his follow through.

Hafeez, who picked up his 50th Test wicket, had figures of one for 24 from seven overs.

Rain has been forecast in the southern coastal town for all five days of the match.

Sri Lanka and Pakistan are due to play three Tests, followed by five one-day internationals and two Twenty20 matches. (AFP)

Pak vs Zim: Shadab Khan may miss first ODI due to injury