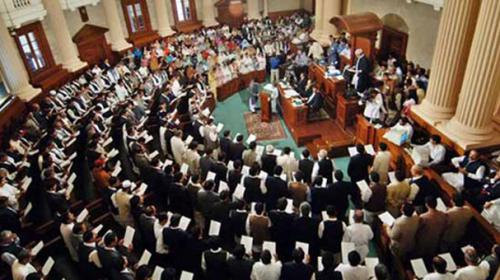 LAHORE: Lawmakers of the Pakistan Tehreek-e-Insaf (PTI) on Friday submitted a resolution in the Punjab Assembly calling for a ban on the use of donkey hides in the production of cosmetic creams.

The resolution, submitted by PTI lawmaker Naheed Naeem, states that the skin of donkeys is being used in the production of cosmetics and that a ban should be imposed on the production and sale of such cosmetic creams.

The resolution also demands that factories using donkey hides to produce such cosmetics should be sealed and strict legal action should be taken against the owners of these factories.

The resolution comes a day after the Economic Coordination Committee (ECC) of the federal cabinet imposed a temporary ban on the export of donkeys' hides.

The ECC clamped ban on export of donkey hides until such time that a regulatory mechanism is put in place by the provinces for proper disposal of carcasses of the animals.

The decision was after local media reported that carcasses of the animals were being sold in the market for consumption as meat. The consumption of donkey meat is forbidden in Islam.

The ECC asked the Ministry of Food Security to convey the decision to the provincial governments to ensure that proper mechanism for disposal of remains of the donkeys was enforced as early as possible.