10 years after 2005 earthquake, 100s of schools yet to be reconstructed 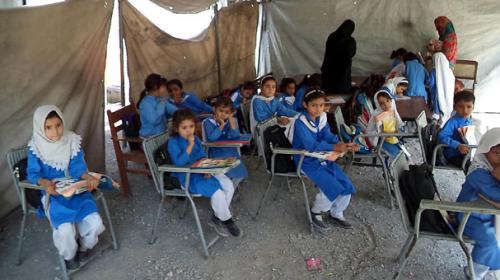 ABBOTTABAD: Ten years ago on this day, a massive earthquake rocked northern Pakistan at 8:52 am and caused more than 80,000 deaths in upper Hazara, Azad Jammu and Kashmir and other parts of country including Islamabad.

The quake measuring 7.6 on the Richter scale left tens of thousands injured and homeless. Balakot and Garhi Habibullah towns and surrounding villages in Mansehra district were razed to the ground.

Subsequently, one of the largest rescue and relief operations was launched in the quake-affected areas with the help of many friendly countries.

The largest helicopter operation in any part of the world thus far carried out rescue and relief operation for almost two months in Azad Jammu and Kashmir and Mansehra, Battagram and Kohistan districts of Hazara.

International donors’ conferences were held to seek funds and an estimated four billion dollars aid poured in for the victims of the calamity. The Earthquake Reconstruction and Rehabilitation Authority (ERRA) were established for rehabilitation of the affectees and reconstruction of houses, hospitals and schools.

The provincial government launched the Provincial Earthquake Reconstruction Rehabilitation Authority (PERRA) in keeping with the spirit of the time.

After declaring the old Balakot town as ‘red zone’ as it was located in a seismic area, the government announced plans for the construction of New Balakot City at a new place near Attar Shisha in Mansehra. Ten years later the New Balakot City remains a dream.

The federal government in December 2014 decided to abolish ERRA. However, Prime Minister Nawaz Sharif announced that all the projects that were under execution and are scheduled to be completed before December 2015 will continue to be undertaken by ERRA.

The premier had said the projects would be fully funded while the residual portfolio of the ongoing projects will be transferred to the respective governments of Khyber Pakhtunkhwa and Azad Jammu and Kashmir with funding commitment from the federal government.

He also announced that funds would be allocated to reconstruct all under-construction schools within a year by the end of 2015.

A former senior official of PERRA told The News that lack of will, administrative lethargy and financial corruption in ERRA and PERRA delayed reconstruction process.

In Abbottabad, the Islamic Turkish NGOs built a high and primary school in record time of nine months. These schools can resist a quake measuring 8.5 on the Richter scale. This was claimed by a technical expert at the time of inauguration of the schools in 2006.

According to a female education officer in Abbottabad who wished not to be named, around 100 girls schools are still at the preliminary stage with no construction work in sight in the near future. “The Turkish NGOs showed their commitment and constructed two schools in record time, but our government lacks the will,” she added.

The Government Girls Middle School, Dhamtor, Abbottabad that was also damaged in the earthquake has become a dumping ground.

According to a villager Qazi Amin, this school is hardly three kilometres away from the residence of provincial Minister for Higher Education Mushtaq Ahmad Ghani.

This scribe visited the Government Primary School, Banj Gali in Union Council Biran Gali in Galiyat area that falls in the NA-18 constituency of Deputy Speaker of National Assembly Murtaza Javed Abbasi and PK-48 PTI MPA Sardar Idrees. This co-education school does not have a building and children are forced to study in the open in harsh weather conditions.

Sardar Rasheed, a social worker from Biran Gali, Abbottabad, said the successive governments had failed to rebuild the damaged schools despite the passage of 10 years.—Published in The News

It is PM Imran Khan's vision to promote cultural values through films: Faraz