Kulbhushan Yadav - one of many Indian RAW operatives captured in Pakistan 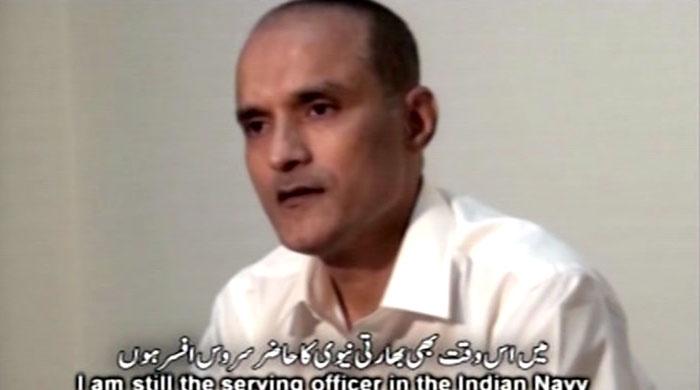 LAHORE: Commander Kulbhushan Yadav is not the first Research and Analysis Wing (RAW) operative caught snooping in Pakistan, though he is certainly the most high-profile spy of all seized till date, an exclusive research conducted by the "Jang Group and Geo Television Network" reveals.

The most notable among dozens of Indian spies caught in Pakistan was Ravindra Kaushik (1952–1999), who was sent across the border in 1975 on a mission at the age of 23 after extensive training in Delhi for two years.

He was circumcised, taught Urdu and Punjabi languages, given religious education and acquainted with the topography and other details about Pakistan.

Operating under the cover name of "Nabi Ahmed Shakir," Ravindra Kaushik had then succeeded in finding a civilian clerk's job in the Military Accounts Department of the Pakistan Army.

He had even married a local woman, who was the daughter of a tailor in one of the Army units, and had eventually fathered a son.

Kaushik was hence captured and questioned for two years at Sialkot.

He was given a death verdict in 1985, but his sentence was later commuted to a life term by the Pakistan Supreme Court.

He was kept in various jails for 16 years, and on July 26, 1999, he had succumbed to Pulmonary Tuberculosis and heart disease at the Multan Jail.

Instead, Sarabjit claimed he was a farmer who had erroneously strayed into Pakistan from his village located on the border, three months after the bombings.

He was given death under the Pakistan's Army Act and the Lahore High Court had upheld the decision in 1991.

However, his sentence was repeatedly postponed by the then Pakistani regime.

The Supreme Court had also dismissed a petition to review his death sentence in March 2006 as Singh's lawyers had failed to appear for the hearing.

While he was languishing in a Lahore prison in April 26, 2013, Sarabjit Singh was attacked by fellow inmates with bricks, sharp metal sheets, iron rods and blades. He had died six days later at a Lahore Hospital.

The government in Indian Punjab, reportedly had declared three-day mourning over Sarabjit Singh's death and had announced to pay his legal heirs a compensation of Rs10 million.

RAW had earlier disowned him many times too.

It is imperative to note that following the attack in prison and subsequent death of Sarabjit Singh, a Pakistani prisoner (Sanaullah) in Jammu Jail was fatally attacked on May 3, 2013, allegedly by another convict.

Sanaullah was hospitalised in Chandigarh, but had perished later due to multiple organ failure.

It goes without saying that afew Indian spies caught in Pakistan were lucky enough to be released by the then Pakistani regimes as "goodwill gestures" and on "humanitarian grounds."

A name that immediately comes to mind in this context is that of Kashmir Singh, who had spent 35 years in Pakistani prisons before he was released with the Presidential pardon by General Pervez Musharraf.

Kashmir Singh had served the Indian Army between 1962 and 1966. He had entered Pakistan in the guise of Ibrahim, but was arrested in 1973 and subsequently sentenced to death by a Pakistani military court.

He was lodged in seven different jails in Pakistan and was kept in solitary confinement for 17 long years.

On March 4, 2008, he was released by Pakistan and entered India through the Wagah border.

In 2012, as the BBC News had reported on July of that year, another Indian spy Surjeet Singh was released at the age of 73 after more than 30 years in a Pakistani prison.

The BBC News had maintained: "When Surjeet Singh left home to go to Pakistan on a cold winter's day in December 1981, he told his wife he would return very soon. It was 30 years and six months before they saw each other again and his jet black beard had turned white. While he was incarcerated for spying in Lahore's Kot Lakhpat jail, his family had given him up as dead. He was utterly isolated; he didn't receive a single visitor or even a letter. Some of his time in prison was spent awaiting his end on death row. Once on home ground, he stunned everyone by openly admitting that he had gone to Pakistan "to spy." India has always denied claims by those returning after stints in Pakistani jails that they were spies for India. But after what felt like an enormous personal sacrifice for his country, Mr Singh is hurt - and angry- by the denial."

He was quoted by the BBC as saying: "It was the Indian government which sent me to Pakistan. I did not go there on my own."

In his absence, he said the Indian Army had paid his family a monthly pension of 150 rupees.

He had questioned the BBC correspondent: "If I didn't work for them, then why did they pay my family? I have documentary proof; I will go to the Supreme Court to get what is my right. I did 85 trips to Pakistan. I would visit Pakistan and bring back documents for the Army. I always returned the next day. I had never had any trouble."

Surjeet Singh, according to the British media outlet, was arrested in Lahore and taken to an Army cell for interrogation. In 1985, an Army court had sentenced him to death and in 1989; President Ghulam Ishaq Khan had accepted his mercy plea to commute his sentence into life in jail.

Research shows that RAW even resorts to espionage in countries that enjoy good terms with India.

For example, as Rediff.com had reported on August 1, 2014, a 45-year-old Indian national was sentenced to a nine-month jail by a German court for spying on the Sikh community in the country.

Ranjit, an electrician, had violated the German law by engaging in espionage operations, the court had stated.

Rediff.com had stated: "The court said during the trial involving nine days of hearing that the convict had collected information on the Indian community in Germany, especially on Sikh extremist groups, and passed it to an official at the Consulate General of India in Frankfurt. It ruled that the convict committed the offence not only by "gravely disregarding" Germany's sovereignty but also by cooperating "conspiratorially and actively" with the Indian intelligence agency. Ranjit, who came to Germany in 2002 with a forged passport, had told the court that he was a Sikh and in India he worked as a member of the All India Sikh Students' Federation, which campaigns for an independent state in Punjab."

In one of its reports on the subject on September 26, 2013, a widely-watched Indian television channel "IBN Live" had said: "Spies - the forgotten warriors of the covert wars. They cross borders to help governments seek vital information and also to carry out secret operations. Though not remotely as glamorous a profession as cinema would like us to believe, their story takes on darker hues if they happen to be caught in enemy territory. Many don't return and those who do, find themselves shunned and unrecognised by the very people who recruited them."

IBN Live had given a long list of these spies.

The listed included Ramraj, who was sent to Pakistan as a spy on September 18, 2004 but was caught the very next day. He had worked for an Indian intelligence agency for 18 years, accompanying spies as a guide.

The Indian channel had added: "Ramraj was finally sentenced to jail in Pakistan for six years. Upon returning to India after almost eight years in February 2004, he tried to reach out to the officials who had sent him as a spy, but Ramraj says they refused to recognise him. Then came Gurbaksh Ram; after completing a year of training, he was sent to Pakistan in 1988. His job was to garner information about the arms and ammunitions used by the Pakistan military. With the job done, he was returning to India after two years but was caught on the border. He was taken to Sialkot's Gora jail for interrogation and was confined there for around two-and-a-half years. The documents he had collected were also seized and he was sentenced to 14 years in prison. He was released from jail in 2006."

The Indian news channel had followed up with names/details of a few more spies in its September 26, 2013 report.

Here follows the list of these spies and some details in this regard:

He was trained as a photographer for almost a year before he was sent by an intelligence agency to Pakistan in 1994. While returning back to India on June 13, 1997, he was arrested and interrogated in Sialkot's Gora jail for a year and kept under detention before a court imprisoned him for 10 years in 1998. During investigation, Ram had revealed he had crossed the border roughly 75 times in three years before being apprehended by the Pakistani agencies. He was sent back to India on July 7, 2008.

Om Prakash had gone to Pakistan on a mission in 1998. His family members claim they have no clue whether he was alive or not.

Vinod, the President of the Jammu Ex-Sleuths Association, had worked as a spy for an Indian intelligence agency. He was taxi driver before he was lured to work as a sleuth by an intelligence official, who had boarded his taxi as a passenger. Sawhney was taken in by the man's beguiling offer of a government job.

He was sent to Pakistan in 1977 and was arrested in the same year. After interrogation and trial, he was sentenced to jail for 11 years. In March 1988, he was sent back to India.

Suram says he tried to enter Pakistan in 1974, but was apprehended by the Pakistani Rangers on the border itself. He was interrogated for about four months in Sialkot's Gora jail, and had spent around 13 years and seven months in different jails of Pakistan before being deported back in 1988.

Balwir was sent to Pakistan in 1971 and was arrested in 1974. After completing his sentence of 12 years in prison, he was sent back to India in 1986. On getting no support from the officials and the agency that had sent him to Pakistan, Balwir took them to court. In 1986, an Indian court had announced a compensation for Balwir Singh and had ordered that it be given to him in the next three months. The compensation never arrived though.

Devut had gone to Pakistan sometime during mid 1990s and came back to India on December 23, 2006 after serving a jail sentence.

Sunil was sent to Pakistan in April 2011 and is probably still languishing in a Pakistani jail.

In 1992, Daniel had started working as a spy for an Indian intelligence agency and was caught in 1993 while crossing the border with Pakistan. After serving his period of sentence, he was sent back to India in 1997.

He is reportedly serving his sentence in a Pakistan jail.

In 1999, when the Kargil war was on, Satpal was sent to Pakistan as a spy by an agency he was working for, and died in a Pakistan jail a year after. His corpse was sent back to India the same year.—Originally published in The News