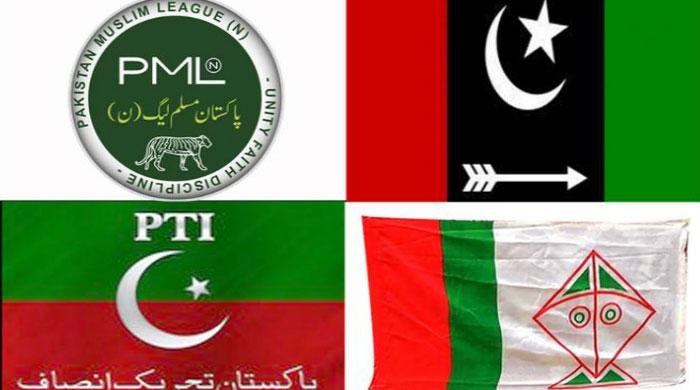 Politics is not only the game of 'possible,' but also accepting the ground realities. This is not an era of ideologies, convictions or commitment. Even someone like Bilawal Bhutto, is finding it hard to capitalize the strong Bhutto legacy. The myth like that of Altaf Hussain is fading out. Sharif is facing stiff challenge from someone like Imran Khan and not from Asif Ali Zardari. This transformation has come through democracy.

In Pakistan the democratic system may not be as strong as in other parts of the world and still has lot of challenges ahead but in the last 10 years some major political developments have taken place which many of us may not have noticed. But it is a way forward.

Today's realities are that the mainstream parties like PPP, ANP, MQM, Jamaat-e-Islami, JUI (F), are all fighting battle for survival or revival.

For instance, the new reality is the rise of Pakistan Tehreek-e-Insaf, PTI as a party and Imran Khan as a leader while Bilawal Bhutto is far behind. In Karachi's politics, if Mustafa Kamal is challenging both MQM Pakistan and MQM London, the PPP is planning to make inroads in Karachi to fill this vacuum.

There has been political transformation in the last few years and if this process continued we may see new leaders and parties.

For instance, in KP electoral transformation came through elections. KP is one province where electorates seem to be more mature and bring changes in each elections.

From 1988 to 2013, almost all the mainstream parties including religious parties have been given chance whether it is NAP-JUI alliance in 70s, PPP, PML(N), ANP, JUI-JI alliance or PTI-JI alliance. Thus one could say that the electorate of KP are quite alert when it comes to vote and can't be taken for granted.

Pakistan People’s Party could be blamed for many things particularly its style of governance and corruption, but parliamentary record shows that it has brought some major constitutional reforms, which can have far reaching positive impact if properly used. These include 18th amendment as well as Presidential powers transferred to the Parliament.

Similarly, for the first time it was agreed that leader of the Opposition, would head the Public Accounts Committee, PAC and in a way government of the day, allows opposition to make government institutions accountable, which also includes some previously 'untouchable institutions,' as well. Sadly in the provinces leader of the opposition were not made PAC Chairman, which should be followed.

Thus the opposition could still take government to task on questions of good governance. If it acts without political compromises and it could expose corruption in these departments. At the same time it could also correct its own flaws.

Another improvement in the system came when it was decided that the composition of Election Commission of Pakistan, ECP and the formation of Interim government before elections would be made with consensus between government and opposition.

Therefore, the present ECP, composition came after weeks long deliberations between the two. Now, if ECP fails to perform its duty, both government and opposition also have to share the responsibility by picking wrong members.

All this led to the smooth transfer of power after 2013, general elections and politics of non interference in provincial set up. There was no horse-trading after strict compliance on rules and procedures. Opposition parties in the center are parties in power in the provinces. In Baluchistan, we also witnessed positive developments when a nationalist leader of minority party allowed to form the government.

Strong Parliament also showed its worth in 2014, when it passed a strong resolution and sent a strong message against any extra constitutional step.

But, in the post Musharraf army doctrine we saw army ensured smooth elections and transition, though, the loss of Benazir Bhutto, who was killed in suicide attack while coming back after addressing an election rally at Liaquat Bagh on December 27th, 2007, once again reminded us of the challenges ahead.

Pervez Musharraf's decision to put Benazir Bhutto and Nawaz Sharif out of the electoral process came as 'blessing in-disguise,' which resulted in historic, 'Charter of Democracy,' COD. All the above mentioned changes came as a result of COD. Many believe that had she been alive we could have witnessed a much improved PPP government from 2008 to 2013.

Political consensus also led to the military operation against terror networks. Even religious and right wing forces who voted against operation accepted some of the ground realities. First under the PPP government operations against these networks were held in Swat and Malakand and then under the PML-N government a major operation, 'zarb-e-azb' was launched in North Wazirstan and other areas.

It is true that politics would have matured earlier had there been no military interventions after 1970. Things would have been much better had our superior judiciary played its role and not given legitimacy to unconstitutional military rules. The growth of militancy, extremism, ethnic and sectarian politics also injected in our society weakened national politics. Corrupt means were adopted, not only to divide popular parties but also to marginalized national politics.

All this led to the fall of ideological politics of 'Left and Right wing.' National parties become hostage to family legacies, bridari, ethnic realities, extremist mindset and personality cult. No mainstream political parties adopted the culture of democracy and intra-party elections.

But even in this fragile democracy such transformation took place. Political parties need to improve themselves otherwise they would either be eliminated or marginalized. For instance, the 'Bhutto card,' is no more relevant today outside Sindh. Even in interior of Sindh, the PPP survival is by default in the absence of true challengers or weak groups. It is an irony that the party's government could not even change the lifestyle of its people or developed its own home constituencies like Larkhana. Instead they face charges of Rs 90 billion corruption.

There is also a lot of lesson for MQM, in Karachi and Hyderabad. Had the leadership showed some political maturity and would not have taken Musharraf's era for granted, abandoned alleged militancy and muscles tactic and instead set some good examples of developments in urban Sindh, it may not be facing the crisis it is facing, today.

MQM not only missed the opportunity of moving forward it also isolated itself from mainstream politics. Today it is a complete Divided House of Muhajirs. The Muhajir voters have already sent the message for both MQM London and Pakistan, for the years to come, through low turnout in the last few elections.

What is the biggest challenge for all MQM factions as well as for its opponents is to bring voters to the polling station, as voters disillusionment is dangerous for politics and democracy.

MQM and its founder Altaf Hussain should have taken the voter's dissident in 2013, in favor of Pakistan Tehreek-e-Insaf as a mean to improve party performance.

Instead through his reaction he only damaged his own party to an extent that no one knows the fate of either, ' manzil or rehanama,' in the next elections.

This is also not an era of attracting voters by giving 'religious slogans.' Jamaat-e-Islami and Jamiat Ulema-e-Islam are too dependent on alliances, which itself means that they have flaws in their politics which has not been able to attract voters. They could create trouble and problems for the government but still are far from 'ruling the country.'

The rise of PTI as a party and Imran Khan as a leader also become possible because of this very system, which Imran and many respected political analysts criticized.

In the last general elections we saw very large number of new voters particularly youth, house wives, young girls, who in the past remained absent from polling booths.

Imran set a good example of holding first party elections and despite problems, at least he initiated the process in 2012. He should not have abandoned it when it was due for the second time. These elections in many ways were more important than his 'dharna' and agitation, as party electoral process could have given him, organisation and set up before the next general elections. Dharna, rallies and agitation can attract crowd but can't bring them to the polling station.

A lot of improvement is still needed in the system as provincial governments in particular have failed in bringing the kind of development expected from them after the 18th amendment and also fails in checking the menace of corruption, but the electorate perhaps, has adopted the concept of bringing change through vote. In a feudal dominated society its a big change in itself.

The writer is the senior columnist and analyst of GEO, The News and Jang.

Schools, colleges, universities to remain closed till May 23 in Pakistan: NCOC