Trial of truth in the age of social media 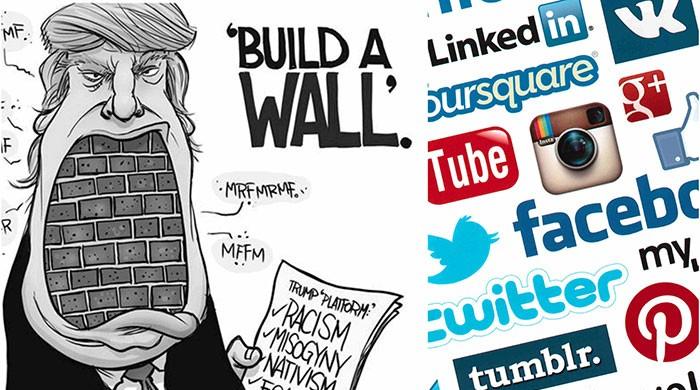 ISLAMABAD: A lie gets halfway around the world before the truth has a chance to get its pants on, is a line famously attributed to Winston Churchill, a former British prime minister. He lived in the pre-digital era. Means of era. Means of communications didn’t have so quick and efficient global outreach when compared with today’s world.

Media was then short-hand expression for newspapers. He himself worked as a journalist. A reporting assignment from Daily Telegraph brought him to Pakistan well before the partition of India.

What had convinced Churchill about the power of a lie and the pace of its dissemination remains unknown. However, his words ring true when read in this age of internet. Truth is on trial around the world. If people in Pakistan suspect the loyalties of their leadership under the influence of fabricated stories, a sizeable population of America believes that President Obama was born in Kenya and is a Muslim by faith.

It is a human nature: they like to hear what they wish to believe. Rumour mills have never been a profiting business as it is today. The social media has enabled its users to spread their message and it has also mushroomed the industry of fake websites to transmit not only inaccurate but entirely unfounded news.

Facebook, the biggest social media website, offers the much-desired forum to the entrepreneurs feeding misinformation to public as ‘alternative viewpoint.’ “The commercial priorities of a company like Facebook shape the algorithmic logic of its News Feed: The happier we are, the more likely the ads shown to us will be effective, so the algorithm prioritises information items that are consistent with our viewpoints,” wrote a journalism professor of America’s Northwest University.

No wonder, Facebook outperforms the traditional news media in the revenue generation. Its reported annual profit stands at $17.9 billion in 2015. This is in contrast with The New York Times, probably the richest newspaper in the world that is betting its future on all digital. Its revenue had been in the range of $1.5 billion between 2011 and 2015.

While Facebook earns profits by posting news links, the websites receive click through sensational headlines and hidden beneath them are often the fake stories. “We’ve had stories that have made $10,000,” admitted an owner of a fake website before BBC.

Victory of Donald Trump in American elections and referendum on Brexit in Britain could have remained a distant dream in pre-digital age. The traditional media in America gave a tough time to Trump. Other than digging out shady details ranging from his business to sexual harassment of women, they opted to oppose him through editorials.

Hillary Clinton was endorsed by 229 dailies and 131 weeklies. Included among them were news organisations that historically have not been identified with either party. Others who endorsed clearly represent a conservative ideology normally linked to Republican candidates. By contrast, Trump received the endorsement of nine dailies and four weeklies. That’s a 27-to-1 difference.

Trump who was declared a liar of 2016 by a political fact-check website on the basis of his baseless allegations, used the social media to counter ‘propaganda’ of traditional news media. His Facebook page has 11.9 million likes; there are 12.9 million followers of his twitter account.

In addition, there were many fake websites promoting his message. They didn’t do this because they believe in his words. It was being done for the profiting purpose. Many of them were operating far away from America. More than 100 such websites were based in a tiny country situated 6,000 miles away from America: Macedonia.

Around 140 websites about US politics in Macedonia were spotted during an investigation by American journalists. "These sites have American-sounding domain names such as WorldPolitics.com, TrumpVision365.com, USConservativeToday.com, DonaldTrumpNews.com and USADailyPolitics.com. Almost all of them publish aggressively pro-Trump content aimed at conservatives and Trump supporters in the US,” the report published in BuzzFeed, a credible news website, said.

Interviews with the owners of these sites found they launched them purely for the profit purposes. “I started the site for an easy way to make money,” said one 17-year old, saying they needed to find a creative ways to make some money.

The contents they uploaded though served the purpose of Trump, it was far from reality. They picked stories, for example, that Pope had endorsed Trump; Obama admitted he was born in Kenya; FBI agent who was suspected of leaking Hilary’s corruption is dead.

This phenomenon is not limited to American elections. Several websites are at work in Pakistan ably aided by the conspiracy theorists appearing on TV channels. They will let their readers know that Prime Minister Nawaz Sharif is a security risk (a message later picked up by his opponents); that Sharif family has businesses in India; army chief has been ranked the best commander of the world; ISI is number one agency of the world; and Islamabad is second most beautiful capital of the world.

This phenomenon has posed serious challenges to the traditional news media. Although newspapers and TV channels have a fair share to blame for disseminating lies, there are platforms available for holding them to account like Pakistan Press Council and Pakistan Electronic Media Regulatory Authority (Pemra). There is no mechanism in place for the accountability of social media and the fake websites. While the government has done legislation, it has been greeted with fear. Cybercrime laws will be used to punish dissent instead of the real culprits, critics say.

There are fact-check websites in the developed countries to expose the distortion by politicians and point out fake news in circulation. This is a good step forward but the challenge is beyond the capacity of fact-checkers.

The social media giants like Facebook will have to take steps by hiring editorial staff to sift the facts from fictions and through blocking the entry of fake websites. Pakistani media has not even taken the first step: hiring dedicated staff for fact-checking. Instead of countering this attack of lies, it has rather become a collaborator. End result is the eroding credibility. People who can’t distinguish between the facts and fabrication are also unable to make a distinction between the credible and corrupt journalists.

Journalists are also victim of such propaganda news. There are lists in circulation on social media about who's on whose payroll. Included among them are those whose financial credibility is above board. It is high time for the media to take up this challenge; else no one will believe us.