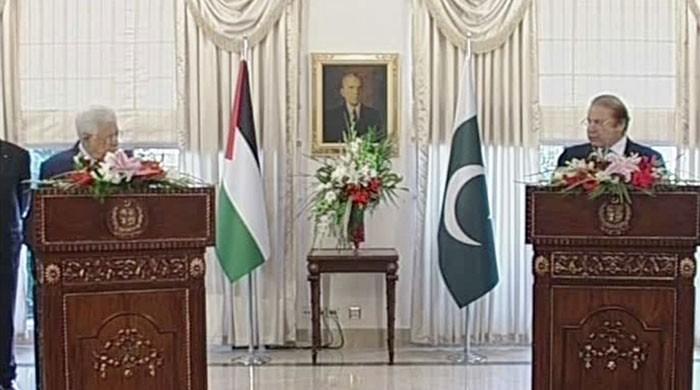 ISLAMABAD: Prime Minister Nawaz Sharif has urged the international community to play its role in just resolution of the Palestinian issue.

Speaking at a joint press conference with President Mahmoud Abbas on Tuesday, Prime Minister Nawaz Sharif said ensuring peace in the Middle East cannot be achieved without just settlement of the Palestine-Israel dispute.

He urged implementation of the relevant UN Security Council resolutions calling for withdrawal of Israeli forces from the occupied territory. The premier said establishment of a viable, independent and contagious state of Palestine with pre-1969 borders and Al Quds Al Sharif as its capital is the only guarantee for sustainable peace in the region.

PM said Pakistan is firm in its support for the just cause of Palestinian people. Referring to the newly constructed Palestinian embassy building in Islamabad, the prime minister said the project would be a symbol of Pakistan’s brotherly relations with Palestine.

President of the State of Palestine Mahmoud Abbas thanked Pakistan for its steadfast support for the cause of Palestinian people, besides financial assistance and scholarships for Palestinian students in Pakistani universities.

Mahmoud Abbas said he had briefed PM Nawaz on the latest developments related to the Middle East crisis, including Israeli settlements and the US decision to shift its embassy to Jerusalem.

The Palestinian president said the two sides had also exchanged views on regional issues and the challenge of terrorism.

The two leaders had one-on-one meeting which was followed by delegation-level talks. There was complete identity of views between the two sides on issues of mutual interests.

Pakistan had donated the plot of land in 1992 besides contributing US one million dollars for the project.

President Mahmoud Abbas, who is on a three-day visit to Pakistan, conveyed his profound gratitude to the Government of Pakistan for its financial and technical assistance for completion of the project.

He described it as a symbol of lasting Pakistan-Palestine friendship.

A young girl presented him a bouquet. National anthems of the two countries were also played.

The Prime Minister later visited various sections of the embassy and appreciated the spacious interiors and the facade.

A large number of Palestinian nationals were present at the event. The two leaders preserved their views of the event by writing on the visitors’ book. They later cut a cake decorated with large flags of Pakistan and Palestine.

Leader of House in the Senate Raja Zafar ul Haq and Minister for Safron Lt Gen Qadir Baloch were also present on the occasion.

National anthems of the two countries were played on the occasion. A smartly turned out contingent of the Armed Forces presented salute and guard of honour to the Palestinian President. The visiting dignitary inspected the guard of honour. The Prime Minister introduced the cabinet members to the Palestinian President and the distinguished guest introduced PM Nawaz Sharif to the members of his entourage.

Efforts being made to arrest Ehsanullah Ehsan: Interior minister

More than 60 foreign skiers participate in Heliski expedition in Shogran