LAHORE: At least 14 people, including senior police officers, were martyred Monday when a suicide bomber hit close to the Punjab Assembly in Lahore when hundreds of demonstrators had gathered for a protest, officials said. The death toll rose on Tuesday after one more person succumbed to their injuries.

According to Inspector General Punjab Police, 13 people were martyred in the suicide bombing. Deputy Commissioner Lahore confirmed that at least 73 people had been injured in the blast.

Police had cordoned off the area on Mall Road, one of the city's main arteries, amid fears of a second blast as rescuers raced to the scene, with images of the injured being carried away shown by local media.

The incident occurred as hundreds of chemists protested a new law near the Punjab provincial assembly building, Rana Sanaullah, the provincial law minister confirmed. The law minister while appearing on Geo News programme Capital Talk said the attacker had been identified.

A heavy contingent of police reached the site of the incident. Media representatives were also present at the site of protest when the explosion took place. The protesters were dispersed following the blast.

The explosion was so powerful that it shattered windows of DSNG vans and police mobiles parked nearby.

Up to 400 people had attended the protest, according to a reporter who was on the scene when the explosion occurred.

"Suddenly there was a bang and a huge blast," he said. "Everybody ran for safety."

As protesters had gathered outside the Punjab Assembly a suicide bomber detonated his explosive device. The attack claimed 16 lives and injured 70 others

Meanwhile, police said that security has been put on red alert in Islamabad.

Law enforcement personnel have arrested a suspicious person from near Charing Cross in Lahore, close to where the suicide bomber detonated his explosives.

According to initial reports from law enforcers, the terrorists had planned to attack the Governor House in Lahore, which was immediately secured by security personnel following the blast. 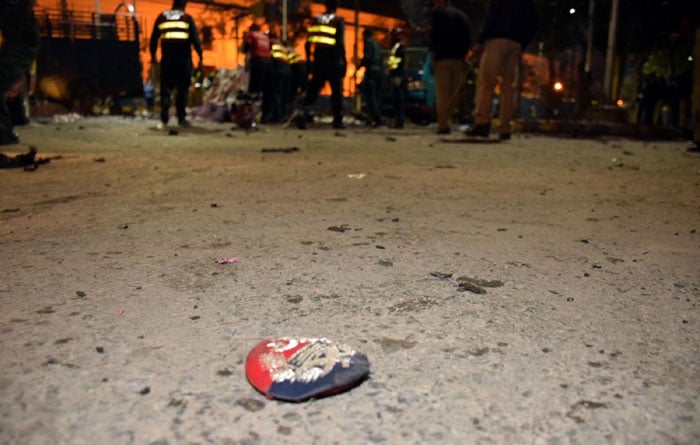 The prime minister, in a statement issued from PM House, directed provincial authorities to reach the site of bombing and expedite relief activities. He directed concerned officials to provide all possible assistance and best medical treatment to wounded of the attack.

Chief of Army Staff (COAS) General Qamar Bajwa while condemning the terrorist attack in Lahore expressed grief over the loss of innocent lives, ISPR said in a statement.

General Bajwa instructed local Army commander and intelligence agencies to provide all necessary assistance to the civil administration in the evacuation of injured to hospitals and also to apprehend those responsible for this heinous act.

A notification issued by the National Counter Terrorism Authority (NACTA) on February 7 stated that an unidentified terrorist group has planned a terrorist attack in Lahore.

NACTA called for strict vigilance at vital installations including important buildings, hospitals and schools to avoid any untoward incident.