According to police, the suicide bomber rammed his motorcycle into the government vehicle, causing an explosion near the Hayatabad Medical Complex. Police cordoned off the area and shifted the injured to nearby hospitals. 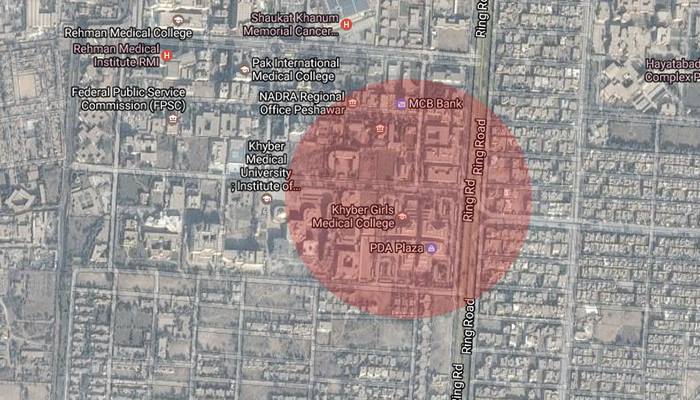 Officials confirmed that civil judges Asif Jadoon, Aman Haider, Rabia Warsi, Tehreema Sabahat were traveling in the vehicle and were among the injured.

SSP Operation Peshawar Sajjad Khan confirmed the attack was a suicide bombing, adding the bomber's body parts had been recovered.

"The bombing happened around 3:30PM near the chowk. The attacker came on a motorcycle and hit the vehicle as he detonated his explosives," said CCPO Tahir Khan.

Khan said the body parts of the bomber and clues from the scene appeared to show that around 15 kilograms of high-grade explosives were used in the blast.

Reporting from the Hayatabad Medical Complex, a Geo News correspondent confirmed that at least 18 injured were under treatment at the hospital.

This is the third terrorist attack reported in the country today.

At least five people, including three levies personnel, were martyred, while many others were injured when a suicide bomber blew himself at the main gate of Mohmand Agency headquarters, Ghallanai, Wednesday morning.