Amid protest against pye-dog culling, KMC agrees to cooperate 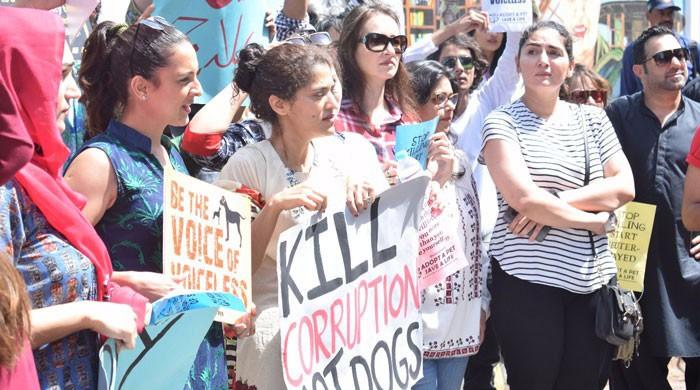 KARACHI: Hundreds of protesters gathered at the Karachi Press Club on Saturday, chanting slogans demanding the city administration to stop the inhumane culling of stray dogs being carried out since the past few weeks.

Dog lovers and owners alike stood together, clutching colourful banners and placards, while a few stood holding their pet dogs on leashes. Among the protesters were numerous prominent names from the entertainment industry and social media, including actress Muzna Ebrahim, theatre director Nida Butt, and activist Junaid Akram. 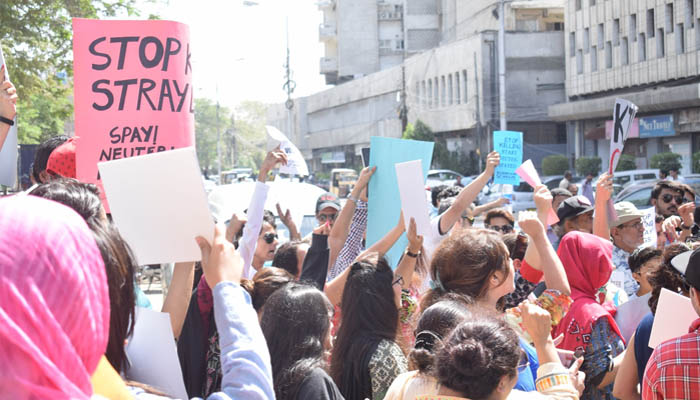 Interestingly, Masood Alam – Senior Director of Municipal Services at the Karachi Metropolitan Corporation (KMC) – also turned up at the demonstration.

Speaking to Geo.TV, Alam commended the better-than-expected turnout, adding that he is open to collaboration between the NGOs and KMC. "We intend to turn this into an opportunity," he said. 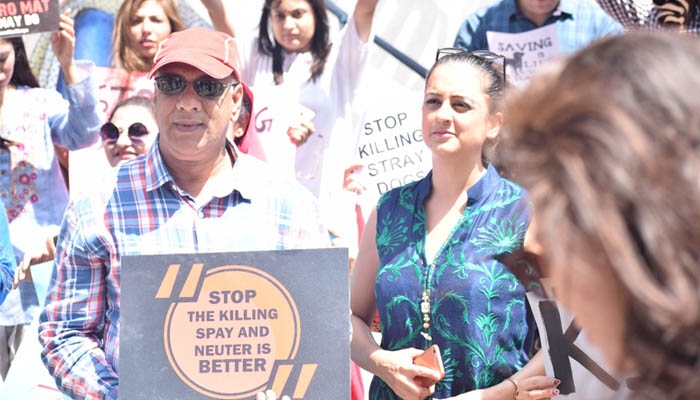 The executive mentioned that nothing has been finalised yet, but for now, the institution is focusing on "the grey area." He commented, "The government will facilitate the expenses. For example, someone tells us that the cost to rescue and treat a stray dog is Rs. 10,000, and we will facilitate it. But no direct fund transfers will take place."

In a phone conversation with Geo.TV, Ayesha Chundrigar of the ACF Animal Rescue specified that the cost per each pye-dog rescued is "at least Rs. 2,500, comprising food, medical attention that includes anti-rabies shots, and neutering or spaying."

She also stated that a dog with rabies only survives for 10 days at most, and it is only this period that is dangerous. "Over the course of 3.5 years, during which more than 1,200 dogs have been treated, I have never encountered a case of rabies," she said. 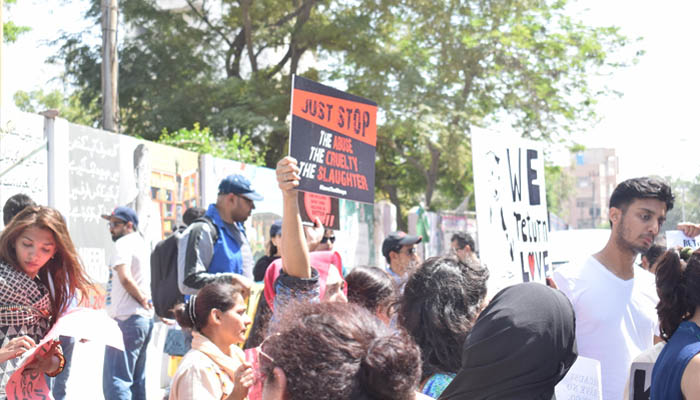 In addition, Chundrigar emphasised on why today’s demonstration was crucial. Dogs, she believes, are important because if their entire population is wiped out, chances of a plague rise manifold. This is because hounds are "part of a chain, which includes cats as well, that keeps rats in check. […] Dogs don’t eat rats, but are known to kill them."

'My dog suffered for 55 minutes'

A few weeks ago, three of Ebrahim’s four adopted stray hounds were poisoned by the KMC following a call from the neighbourhood. The actress was left devastated and took to social media, sobbing relentlessly, to express her frustration.

"I don’t have a big house, but I have a big heart. I’m taking care of them and they’re taking care of me. They’re well-trained, well-groomed, and vaccinated," Ebrahim told Geo.TV. She claimed that one of her dogs went through an hour-long period of agony as its organs shut down due to the poisonous medicine it was administered. 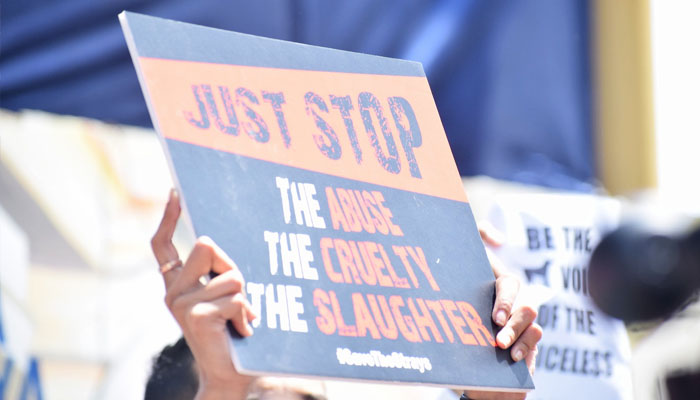 A protestor at the Karachi Press Club holds a sign that reads "Just stop the abuse, the cruelty, the slaughter," March 18, 2017. GEO/Haseem uz Zaman

The canine-culling strategy is not new to the metropolis, as it comes into effect every time there’s a surge in the number of dog-related cases reported in hospitals.

While animal rights activists and NGOs from all over Pakistan have been making pleas time and again, it is probably Ebrahim’s loss that acted as a trigger to spearhead the backlash toward administrative authorities’ inhumane solution to suppress the number of pye-dogs.

Alam explained that KMC has only one method to kill dogs: spreading poison-filled capsules in trash cans and garbage dumps, where stray hounds are most likely to eat them. There’s a batch of 50 capsules per each waste site in an area.

"Capsules are hidden in meat and mithai, among other food items, which are then thrown into garbage dumps. [Later], the dead bodies of dogs that ingest the capsule are found in a one-kilometer radius."

The senior director also underscored that despite NGOs’ claim that “poisonous medicines cost Rs. 20 per kilogramme, they are actually Rs. 400,000 for a kilogramme.” 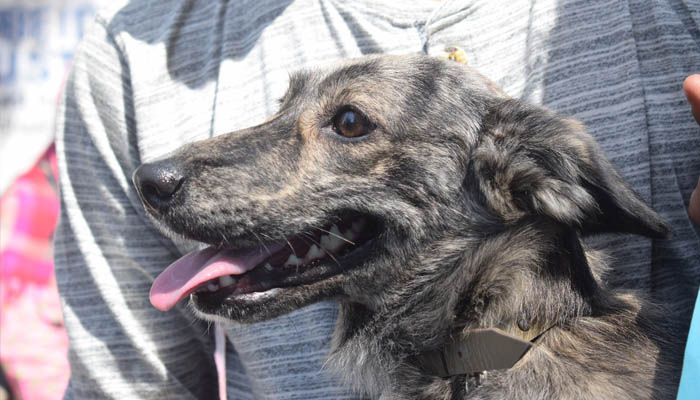 A demonstrator carries his dog in his arms during the protest at the Karachi Press Club, March 18, 2017. GEO/Haseem uz Zaman

Reward to kill and target practising

Dogs have not always been treated as an important part of this nation. So much so that the fact that they are living creatures and can feel is ignored.

“[Civic authorities] have even involved the general public in this from time to time by offering cash as reward for every dog killed,” says an article on stray dog management on Pakistan Animal Welfare Society’s (PAWS) website.

Others have alleged that some political groups even used dogs to practice aiming and shooting with guns.

Pushing the issue to higher level

Chundrigar applauded the action taken today. “The protest has been quite a big step so far to raise voice for those who cannot speak for themselves. You just have to have the passion and determination to follow through with plans,” she said.

Ebrahim and Butt stated that their only issue is for authorities to abandon the brutal practice. “Give them lethal injections, re-release them with a collar back into their [respective] areas. Once in a while, offer them food; they will remember your kindness for the rest of their lives.” 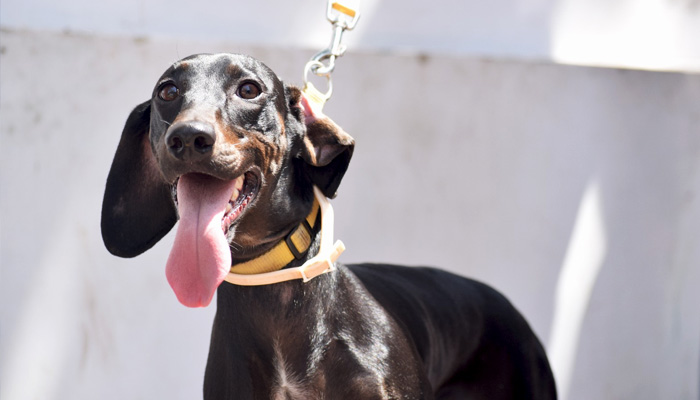 The discussions between the animal lovers and KMC – during which Geo.TV was present – led to seemingly constructive development. The two parties agreed to join hands in trying to control the rising canine numbers in Karachi. Alam agreed that the authority, for now, will redirect dog-related complaints to NGOs, which will then send out their teams to bring the animals to their respective shelters.

"It is not finalised yet. [For starters], we are focusing on the grey area," the director said.

In the longer term, he urged activists to take the issue to the assembly.

“Once you go to the assembly, it’ll be heard” by all the political parties, and “from there, it will go to all stakeholders of Karachi,” he advised.

On either side of the ‘bridge’

Author J. K. Rowling, through the character of Sirius Black in her Harry Potter series, said, “If you want to know what a man's like, take a good look at how he treats his inferiors, not his equals.”

Junaid Akram’s statement was exactly along the same lines as he spoke to us about how surprised he was at the turnout, noting, “You can tell quite a lot about the society by the way it treats its animals.” 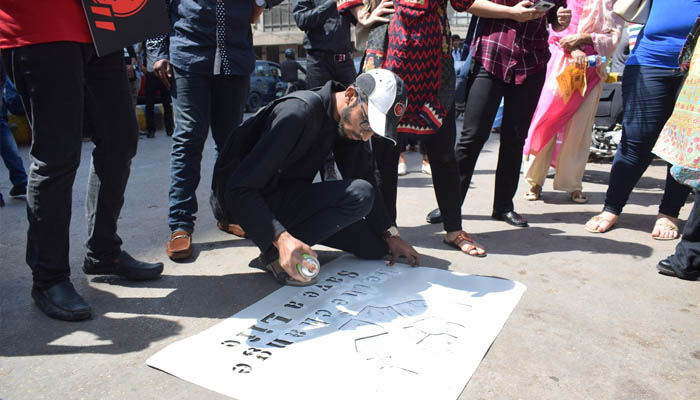 One of the demonstrators uses a stencil to spray paint a slogan on the road near the Karachi Press Club, March 18, 2017. GEO/Haseem uz Zaman

The video blogger stressed that being an activist doesn’t mean one is supposed to cater to all societal issues. “The aim is to make your voice heard, that’s how things work in a democratic society,” he said, though he did acknowledge the presence of bureaucratic red-tapeism.

Akram also underlined how the authorities' reaction to any problem in Pakistan is to close down whatever they believe is causing it, hinting at bans on pillion riding and YouTube. In addition, he expressed confusion at how certain online activists claim that protests against dog-culling are elitist problems, thereby creating divisions in the community by categorising issues according to income levels.

"Calling someone elite is now synonymous with abusive words. […] If they have the means to look after these [dogs], so what’s wrong with that?"

What the attendees had to say

The protest participants were quite joyous at finally taking a stand for their beloved animals.

Hamza, one of the protesters, told Geo.TV how he was unsure if anyone would actually come to the demonstration. "I remained in the car waiting for the crowd to gather. Once it did, I was motivated to join. It’s a win-win situation now that someone from the KMC showed up."

Another demonstrator, Ali Abbas, said, “If no one does anything, change will never happen. [Although] this is not the most sophisticated way to deal with this issue, we’re giving you an alternative. If you still don’t do anything, then what are you in the position of power for?” 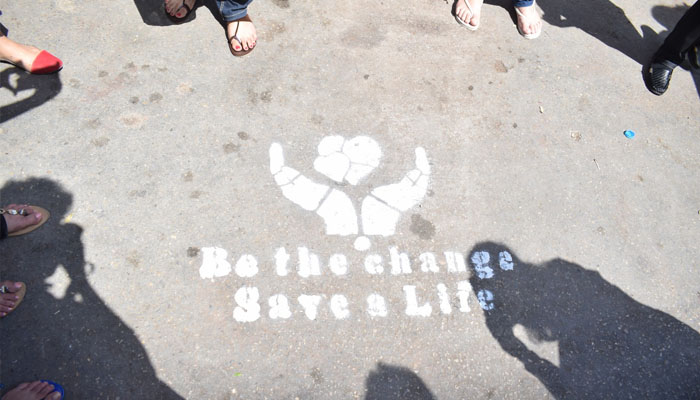 "Be the change. Save a life," reads the phrase spray-painted on the ground by a demonstrator, March 18, 2017. GEO/Haseem uz Zaman

One of the ladies, on the other hand, was still sceptical. “The problem is the people’s mindset here. Humans can speak for themselves, animals can’t. [But, people believe that] dogs are haram, are not supposed to be kept at home, and that it’s better if they die.”

As Butt aptly put it, “the least that can be done is to stop something bad from happening.”