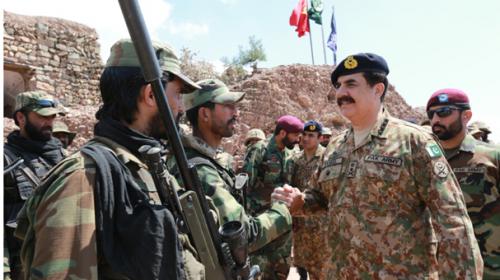 According to the ISPR, 263 hardcore terrorists have so far been killed after being surrounded in Tirah Valley of the Khyber Agency.

In a series of tweets, Director General (DG) ISPR Major General Asim Bajwa said terrorist strongholds in Khyber had been reduced and the fight was now progressing in the last few pockets close to the Afghan border.

He added that the noose had been tightened and no escape was being allowed.

DG ISPR further said the area was infested with improvised explosive devices (IEDs) which he said were mostly foreign-made.

“392 IEDs have been neutralized by the Special Engineers Unit. 35 soldiers embraced Shahadat since the start of the operation in Khyber,” he said.

The COAS paid rich tribute to the sacrifices rendered by soldiers and appreciate successes made. He directed that the momentum in the operation should continue and it should be taken to its logical conclusion which is the complete elimination of terrorism from Pakistan and peace being established.