Only good deliverance can save PPP: Fahmida Mirza 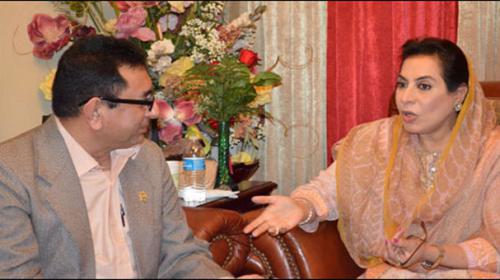 DALLAS: Pakistan’s National Assembly member and former speaker Dr. Fahmida Mirza said that PPP is at a big loss, and if good governance and good deliverance is not exercised, further damages will be done to the party. The feud between Asif Zardari and Zulfiqar Mirza would need to be resolved.

She made this statement while talking to Jang/ Geo correspondent at an iftar dinner hosted by Sindhi Association of North America President Moazzam Bhangar at his residence.

She said that she would not like to be a part of any feud between two people as she won’t play any role in two individuals fight. However, “if it is a matter of governance and I am in the middle then I would definitely like to play a role”.

She said that she did not know why people ask her about the feud between Zulfiqar Mirza and Asif Zardari.

She said that she was National assembly speaker when Zulfiqar Mirza resigned from ministry, she had played her role then too, and no one asked her as which side she is in this fight or why she did not resign from her office.

“It was because they needed me at that time and that they did not have enough votes.” she said

She said she had her own struggle for the party and for the people; similarly, Dr. Zulfiqar Mirza had his own. If Zulfiqar Mirza is saying something on governance and deliverance then they should listen to him.

She said that if we believe in democracy and people then we would have to face public opinion and be answerable to people.

She said that people of Pakistan gave us five years and now two and a half years have passed. We should have made a positive change in people’s lives which is not yet seen in Sind. Our youth is unemployed, the education and health issues are not resolved, and corruption is at a new height.

She said that it is important to hire honest and capable officers, which is not a daunting task.

She said that she has raised voice within and outside of the party and she will keep raising these issues, no matter how much of the price she has to pay.

She said that her house was attacked and no one asked me about it. She said she missed BB very much at that time.

She said as a wife, I will stand with my husband at any cost.

She said that Mohtarma Benazir Bhutto called me her home and awarded the party ticket. She nominated me as Sind information secretary and appointed me a member at Central committee.

She said that she has won National Assembly seat four times and not nominated on special reserve seat.

Responding to a question she said that not only Sind but the whole Pakistan is cluttered with Madrasahs which needs to be taken care off. She said that if regular education requires a syllabus then why Madaris can be regulated in this way.

Commenting on her trip to US, she said that she came to US for her medical checkup but she had met with several Pakistanis living here.

She said that she is glad to see the passion in Pakistani women here. However, she is quite frustrated with the situation in Pakistan.

She said that people often ask me as when the situation will change in Pakistan, she said that if these women create a platform here and work for the betterment of Pakistani situation, they can raise their voice for Pakistan.

She said that the aid comes to Pakistan is mostly spent on urban areas, where 70% of Pakistani population lives in rural part, where 80 percent people live below poverty line, so money should be spent on these areas.

A large number of Sindhi women also gathered at this occasion where a sumptuous dinner and iftar was also hosted.

In the end, the hosts Moazzam Bhangar and Hina Bhangar thanked all the guests.