Bodies recovered from burnt down car in Noshki 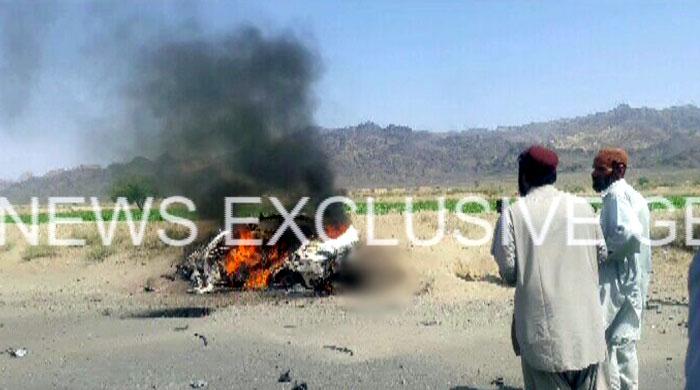 QUETTA: Two bodies were recovered on Sunday from a burnt down car in Noshki area of Balochistan province close to Pakistan's borders with Afghanistan and Iran.

The bodies were recovered hours after reports of Afghan Taliban leader Mullah Akhtar Mansour being targeted in a US drone strike in the Pak-Afghan border region.

It was unclear if either of the bodies was that of the Taliban leader.

Sources said one of the two bodies was identified as that of a local driver named Mohammad Azam, whose cousin confirmed that he was bringing a passenger from taftan to Quetta.

The second body was burnt beyond recognition, but the deputy commissioner in Chaghai said a passport had been found from near the vehicle.

The passport belongs to a man named Wali Mohammad, a resident of Qila Abdullah in Balochistan, he said.

It was yet to be determined if the passport belonged to the second man riding in the car, which was completely destroyed by the flames.

Initial post-mortem of the bodies revealed that both men recieved injuries from an apparent explosion. Hospital sources said the men appeared to have died after explosive material blew up, and that they had also suffered wounds from metal shrapnel hitting them.

Pakistani authorities are currently investigating the incident to ascertain the identities of both the bodies.