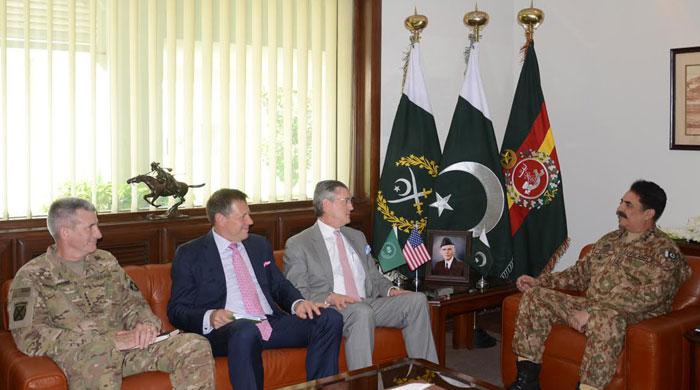 RAWALPINDI: Chief of Army Staff General Raheel Sharif has urged the US to target the banned Tehreek-i-Taliban Pakistan (TTP) and its chief Mullah Fazlullah in Afghanistan, from where he is known to operate and launch attacks against Pakistani forces with impunity.

The Pakistani army chief said this in a meeting with US General John Nicholson, the top commander of the Resolute Support Mission in Afghanistan, and US Ambassador Richard Olson, who called on General Raheel Sharif at the General Headquarters (GHQ) here today.

According to an ISPR press release, the regional security situation came under discussion during the meeting, "with particular reference to border management and peace and stability in Afghanistan in the post-21 May US drone strike environment".

"Expressing his serious concern on the US drone strike as a violation of Pakistan's sovereignty, the army chief highlighted as to how it had impacted the mutual trust and respect [between the US and Pakistan] and was counter-productive in consolidating the gains of Operation Zarb-e-Azb," said the ISPR statement.

"All efforts for durable peace in the region have to be synergized with shared commitment and responsibility in order to make them successful,” the army chief was quoted as saying.

Gen Raheel Sharif said that, "while Operation Zarb-e-Azb was launched against terrorists of all hues and sanctuaries of terrorists have been dismantled without discrimination, all stakeholders need to understand Pakistan’s challenges with regard to porous border, inter-tribal linkages and decades-old presence of over 3 million refugees.

"Blaming Pakistan for instability in Afghanistan is unfortunate," he told the US officials.

Raising the demand to target TTP and Mullah Fazlullah in their bases in Afghanistan, the Army chief reiterated Pakistan’s resolve "not to allow hostile intelligence agencies' efforts, especially RAW and NDS, of fomenting terrorism".

The army chief further reaffirmed the need to continue harmonized efforts against terrorists and effective border management as ways to regional peace and stability.

"Pakistan is committed to work for a long term peace process for Afghanistan under the QCG framework," he said.

Pakistan to resume Afghan exports through Wagah crossing from July 15