Seven killed in clash between Pak, Afghan Taliban in Kunar 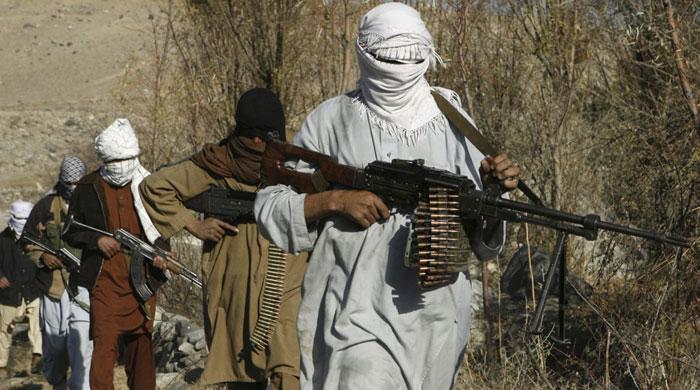 PESHAWAR: Seven militants were killed during a clash between the Afghan and Pakistani Taliban in the eastern Kunar province of Afghanistan, police said on Friday.

Abdul Habib Saidkhel, the police chief of Kunar, told the Afghan Islamic Press (AIP) that the clash took place in the Pashad area of Sarkano district. He said six Afghans and a fighter of the outlawed Tehreek-e-Taliban Pakistan were killed in the clash. He said that three Afghans and two Pakistani Taliban were also injured in the skirmish.

Meanwhile, local people said that four of the six Afghan Taliban killed in the clash were the residents of Pashad. They said the other two hailed from Badeel Darra in Naurang district. The AIP, while quoting sources, said that differences between the Pakistani Taliban and a shadow Afghan Taliban governor led to the clash.

Our Khar correspondent adds: Militants based in Kunar attacked the Pakistani security check posts in the Nawagai Tehsil in Bajaur Agency with rockets and heavy weaponry on Friday. However, no casualty was reported in the pre-dawn attack. The sources said unidentified militants fired a barrage of rockets on the check posts in the Nawagai Tehsil early in the day. Pakistani security forces, the sources said, retaliated in a forceful manner, forcing the attackers to flee across the border to Afghanistan.

Official sources said that one of the terrorists was injured in the retaliatory fire by the Pakistani soldiers.Pakistani Taliban militants escaped to Afghanistan’s Kunar province some years ago after the military operations in Bajaur and were able to set up sanctuaries in the bordering area.