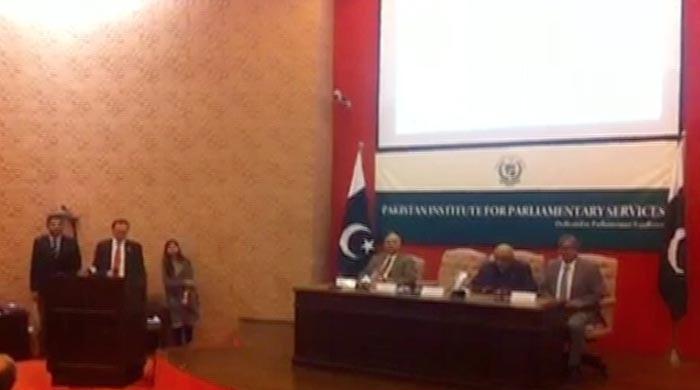 ISLAMABAD: An inauguration event was held on Tuesday for the website of China-Pakistan Economic Corridor, which is said to disseminate information about the project to masses.

Chinese Ambassador Sun Wi Dong also attended the inauguration ceremony in the capital. During the ceremony, he addressed the participants and said that work on a large scale has begun on the project.

The Chinese envoy said that 10,000 locals got employed by 17 projects of the CPEC.

Senator Mushahid Hussain Syed also addressed the participants and shed light on the project between the two friendly neighbouring countries.

The senator said that the website will clear the air of confusion and dispel rumours about the plan.

The CPEC is a mega project of USD 45+ billion, taking the bilateral relationship between Pakistan and China to new heights. The economic corridor is about 3000 Kilometres long consisting of highways, railways and pipelines that will connect China’s Xinjiang province to rest of the world through Pakistan’s Gwadar port.

Why has Shahbaz Sharif's release on bail been delayed?

Ramadan calendar 2021: What time is iftar in my city today?