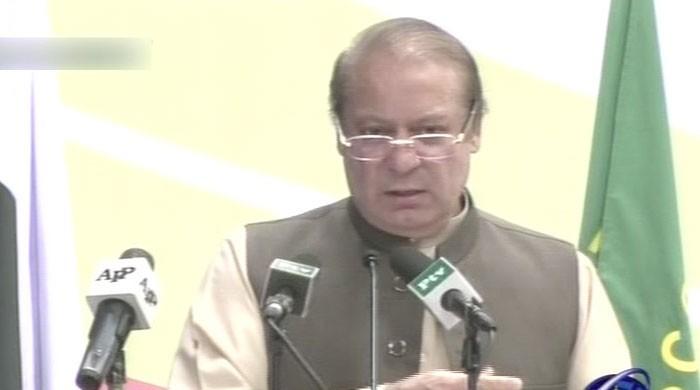 Addressing 40th Export Awards ceremony of the Federation of Pakistan Chambers of Commerce and Industry in the capital, the Prime Minister, the chief guest at the event, said Pakistan has faced several critical challenges in the past few years but the government has tackled them with vision and courage.

The Prime Minister said the government has been able to eliminate loadshedding for the industrial sector and will be able to root it out for domestic consumers by 2018.

“Governments that came and went during 2008-2013 promised many times that loadshedding would be eliminated within six months, but nothing was done,” he said.

‘Backbone of terrorists has been broken’

“We have broken the backbone of terrorists and their remnants would also be eliminated,” he said, adding that he is confident about Pakistan’s future.

“Our faith teaches us to eradicate terrorism and mischief,” he continued, adding that countries which fail to root out terrorism and evil fail eventually.

The premier said it is time to benefit from the improved peace and security situation in Pakistan as terrorism is about to be exterminated from the country.

The Prime Minister said the Karachi operation will continue until the desired results are accomplished.

He said the government took measures to address the challenge of lawlessness in Karachi, and the result can be seen as normalcy has returned in the mega city.

“The lights and peace of Karachi have been restored,” he said, drawing attention to the improved peace and security situation in the metropolis.

Prime Minister Nawaz Sharif said the China-Pakistan Economic Corridor (CPEC), especially development of Gwadar, would prove to be a game changer for not only Balochistan and Pakistan but also the entire region.

On development projects in Thar, the Prime Minister said the government is setting up coal projects in the area and called Thar the “hope of Pakistan’s future”.

The Prime Minister said Bhasha dam will be the country’s biggest dam.

“It will be bigger than Mangla and Tarbela dams.”