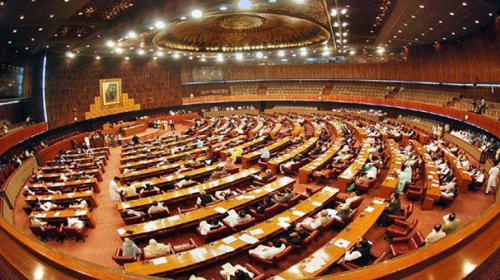 ISLAMABAD: The joint-session of Parliament on what Pakistan’s role should be in the crisis unfolding in Yemen continued for the third consecutive day.

Meanwhile, Iranian Foreign Minister Javad Zarif has arrived in Pakistan on a two-day trip to discuss the situation in Yemen with Prime Nawaz Sharif as well as Chief of Army Staff (COAS) General Raheel Sharif.

During yesterday’s session, the PM called on Iran to get involved in talks on security in Yemen.

Iranian Foreign Minister Zarif has repeatedly said the conflict in Yemen should be overcome diplomatically. "All countries must work toward establishing stability and preventing the spread of insecurity in the region," Zarif said last month.

Senator Syed Ghani in his address praised the government for calling the joint-session of Parliament. The senator, however, emphasised that the government’s stance on Yemen was not clear.

Ghani added that the issue could not move forward unless the reality of it was conveyed in Parliament.

Senator Rehman Malik and PTI MNA Shah Mehmood Qureshi spoke to reporters outside the Parliament and asked the government to provide details of the Saudi request for military assistance.

“A 2-3 point agenda of what discussions have been held should be presented and discussed in the assembly,” Malik said.

“Till now there is no clarity in the position of the government,” said Qureshi adding that the country’s political parties were opposed to sending troops to Yemen.

Conflict in Yemen is a civil war, says Mazari

Pakistan Tehreek-e-Insaf (PTI) Information Secretary Shireen Mazari said that the issue was not of Saudi Arabia’s territorial sovereignty or integrity, as it was being portrayed, but this was a civil war inside Yemen.

“If there is any threat to the holy cities of Mecca and Medina, it will be our responsibility as Muslims to protect them. But there is no threat there,” she said.

She said that Pakistan should learn from the mistakes it had made in the past.

“After 9/11 we said we will only give (the Americans) logistical support, but we opened everything up for CIA and Blackwater,” she said.

“We should learn from our history, defend ourselves, not the entire Muslim world,” she added.

She said that her party’s policy was clear on the issue: “Our military is already overstretched. This is not our war. We will not turn our army into camel fodder for others’ wars. “

She said that Pakistan should oppose this principle of the ‘coalition of the willing’ and bypassing UN charter.

“Just like the US attacked Iraq, Saudi Arabia is forming a coalition of the willing. Why did Saudi Arabia not go to the United Nations?” she asked.

War in Yemen not our war: Muzaffar Hussain Shah

“The war in Yemen is not our war,” said Senator Muzaffar Hussain Shah. He added that the crisis in Yemen was political and not a military one. “It is not a crisis that evokes or warrants military action.”

He emphasised that the crisis needed to be addressed in political terms.

Parliament should guide government on Yemen:PM

“We want Parliament to guide us on what policy should be adopted,” said the prime minister on Tuesday as he addressed the session. “The government wants to make its policy based on recommendations from Parliamentarians.”

Responding to Mushahid Hussain’s recommendation to involve Turkey in the peace process, the prime minister said that Pakistan was waiting on a response from the Turkish president regarding his talks with Saudi Arabia and Iran after which the next strategy will be formulated.


Responding to questions raised by the PPP’s Aitzaz Ahsen yesterday, Sharif said that there could be no further clarification on what has already been offered by Defence Minister Khawaja Asif.

"This is a sensitive issue. This debate is being broadcast everywhere, both inside and outside Pakistan, and we should be careful about choosing our words," said the prime minister.

Sharif told lawmakers that he did not want to "manipulate you to get a mandate".

"Take your time, we are not in a hurry, we will take all your good points and I want the parliament also to say something about demands of our friends," he said.

Sharif met his Turkish counterpart Ahmet Davutoglu in Ankara on Friday and said afterwards both countries wanted a peaceful resolution to the Yemen crisis.

"We are actually waiting for an answer, which I expect will arrive by tomorrow," he said, adding that Turkey may send its foreign minister or convey the message by phone.

"We will see what we can do after that. We might visit other Muslim countries together."

On Monday, Defence Minister Khawaja Asif briefed Parliamentarians in detail about Saudi Arabia’s request, the developing situation in the Middle East, and Pakistan’s policy so far.

The first day of the session was marred by political debate and sloganeering on the return of Pakistan Tehreek-e-Insaf (PTI) lawmakers to the National Assembly after resigning from their seats seven months ago.