KARACHI: A Malaysian court's ruling over which authorities impounded a plane of the Pakistan International Airlines (PIA) yesterday "would have been different had the PIA's stance been considered", the national carrier's spokesperson said Friday.

Khan said it was common for payment disputes between two parties to arise and courts to be approached, with international agreements normally stating clearly which laws would govern should a conflict arise in a case.

In the case due to which the PIA plane was impounded in Malaysia, the airline "is contesting the case in the UK but there has been no ruling in this case".

"All of a sudden, [the private company] obtained an ex parte decision from Malaysia — which means that neither was the PIA's viewpoint heard nor was it served any notice — and it's shocking because the PIA operates in Malaysia as a registered organisation, has assets, presence, and registered offices there, and its sales go in their bank accounts," he said.

"We believe that if the PIA's stance had been heard, the decision might not have been what was announced [earlier today]."

The PIA spokesperson explained that the company in 2015 obtained two planes — Boeing 777-200 extended range (ER) planes — via "a lease through tender from the company that has initiated the case against us".

"Before us [the PIA], these planes were with VietJet Air, which has caused confusion that these planes perhaps belonged to Vietnam. However, that's not the case and the company we got them from is Dubai-based."

The PIA representative underlined that the national carrier was making lease payments properly since 2015 but a dispute arose in 2020 due to the coronavirus pandemic and the subsequent lockdown.

"Some terms [of the lease payments] were not adequate given the current situation and we tried to convince them on those terms. They obviously didn't agree, took the legal course of action, and lodged a case against the PIA in the UK in October 2020. The PIA got a notice against it and our legal team started contesting it."

Khan mentioned that since the next case hearing was scheduled in the UK on January 22, "all of our attention was focused on contesting that case and we were not expecting that they would approach Malaysian court to obtain an order to impound [our] plane".

"This is a radical step. Normally, airlines and leasing companies do not go this far — to take such an extreme action — unless the airline has defaulted or some other conflict arose.

"However, now that this matter has come up and is in the court, it will be resolved through the court and since the incident occurred over the weekend, further action will be taken on Monday."

Khan added that the PIA would contest the case in the Malaysian court.

"However, since the COVID-19 pandemic grounded the planes, we thought the payments were not justified as there was no plane utilization and the planes weren't aging.

"A dispute arose and we were talking to [the company] about it and we thought that due to coronavirus, there's a force majeure clause — beyond your control or act of God — and conditions change. So we claimed that the COVID [pandemic] is an act of God — such a pandemic occurs maybe once in a 100 years — and we said that that clause should be invoked in these circumstances," he said.

Khan said the issue of lease was not since 12 years — as Special Assistant to the Prime Minister on Political Communications, Dr Shahbaz Gill had claimed — "but this plane joined the PIA fleet in 2015 and will leave in 2021 as the lease tenure ends in July 2021".

Khan added that at present, no out-of-court settlement was being considered since the case was being contested in the UK court. "The PIA contacted their commercial team and has voiced regret that this action was neither okay nor should have been taken at this time," he added.

'MQM-P to stand with PTI,' says Amin-ul-Haque in joint presser 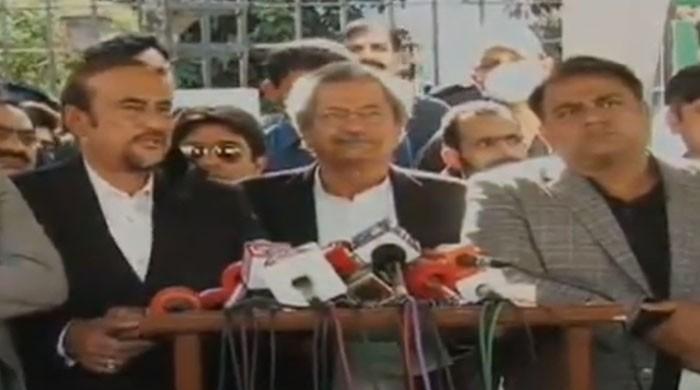